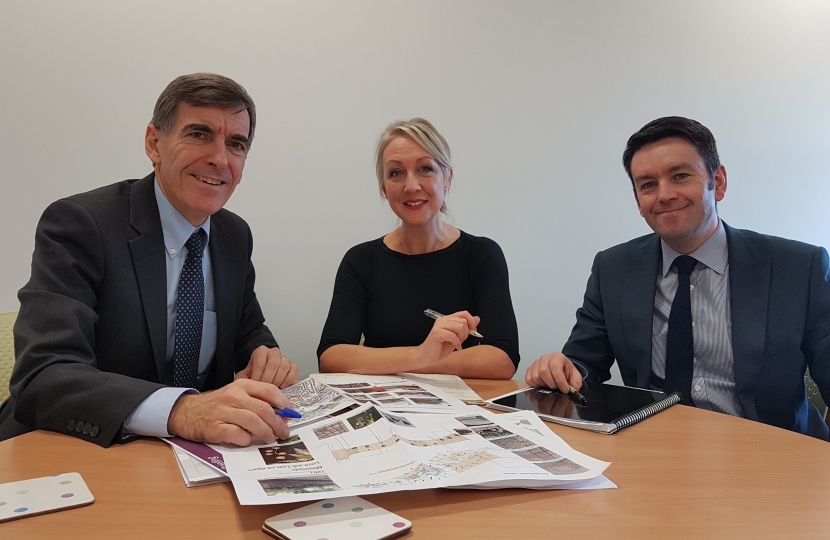 David and Mr Jordan and Ms Wise talked about how the leisure-led scheme for a multiscreen cinema with restaurants is progressing. David was also updated on the responses to Ask Real Estate's public consultation and heard how they are working actively to press on with this key project in the months ahead, with the intention that the development should be open in early 2020.

Cheshire East Council’s plans for investment in the public realm were also discussed. Up to £1.4 million has already been allocated by the Council, primarily focussed on the Castle Street area, and linked to the redevelopment of the Cheshire Building Society premises, due to be completed in Spring 2018. David has been pressing the Council to commit further investment to public realm improvements. He was, therefore, pleased to learn that the Council’s Portfolio Holder for Housing, Planning and Regeneration, Cllr Ainsley Arnold, is actively considering pursuing further phases of public realm enhancement in the core of the town centre.

Speaking after his meeting, David said, "I am pleased that progress is being made on these vital priorities for the town centre, and that there is ongoing consideration being given to further public realm investment. It was positive to see how local residents have engaged with these plans, and to learn more about how Cheshire East Council is actively listening to the views of local residents and businesses. I will continue to work with the Council, and local businesses and community groups, to deliver plans to regenerate and revitalise Macclesfield town centre."