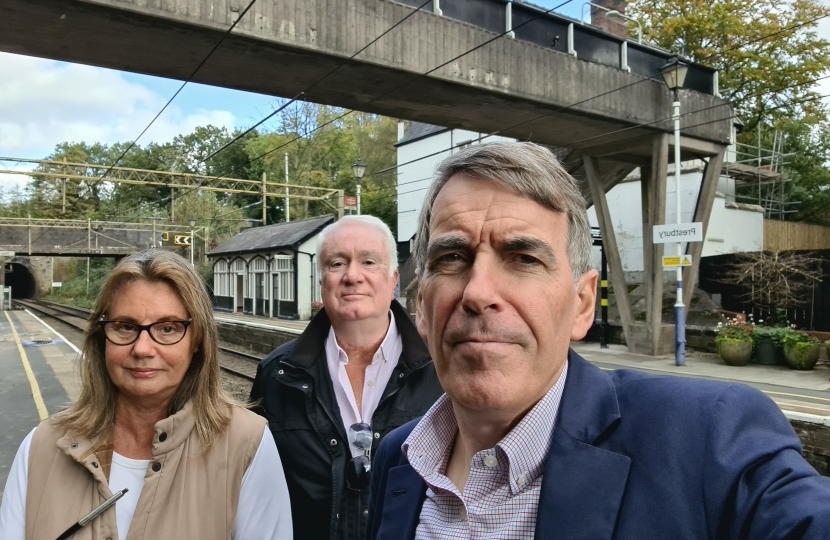 Prestbury Parish Councillors, Marilyn Leather and Denzil Murphy, recently showed David Rutley, Macclesfield’s MP, the improvements that are urgently needed at Prestbury train station on his recent visit. They are frustrated with the lack of progress in working with Northern and Network Rail, as the Parish Council has worked hard to help address these issues over recent years.

The local Councillors showed David where the waiting rooms on both platforms have been vandalised, with windows having been broken, and how they need to be redecorated. They also highlighted the need for more regular cleaning at the station, with both litter and mud from a nearby building development causing issues for local passengers. The drive leading down to the station and the car park need resurfacing, as there are many potholes that need to be filled.

Prestbury Parish Council has long campaigned to have CCTV cameras installed to improve public safety and prevent further continued damage and acts of vandalism, particularly as the nights draw in. However, even though the Council has offered to help fund this initiative, Network Rail and Northern have not given approval for it to go ahead.

David has promised to follow up with Network Rail, which runs our railways, and Northern, the local train operator, on these important concerns. He is also asking for a meeting with representatives from both organisations over the weeks ahead to help ensure that action is taken as a priority.

The Prestbury Parish Councillors were also encouraged by David to contact Disley Parish Council and Friends of Disley Station to see what lessons could be learned from the work that they have done in partnership with Network Rail and Northern over recent years.

After the meeting, David said, “I am grateful to our Prestbury Councillors for taking the time to show me the improvements that are urgently needed at Prestbury station. I will follow up with Northern and Network Rail to urge them to press ahead with the outstanding works and seek a meeting with them at the station. Progress has been too slow over recent months and more should be done to improve the experience of passengers using the station.”