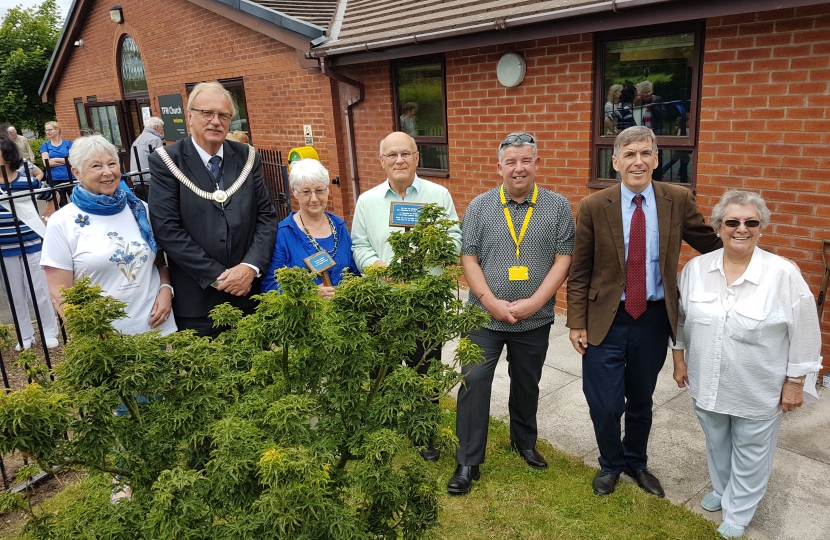 Local dementia patients, and their families and carers, were joined recently by Macclesfield MP, David Rutley, for a 'Seeds of Kindness' event, to help raise much-needed awareness of those who care for people with Alzheimer’s and Dementia and make Macclesfield an even more dementia-friendly community.

The highlight of the well-attended event, which was kindly hosted by Tytherington Family Worship Church on Sandwich Drive, was the planting of a special Acer tree of remembrance, which was planted by Cllr Steve Edgar, with David’s assistance. There were also information stands set up, and cake was served, with musical entertainment for guests to enjoy throughout the afternoon.

A time capsule containing messages from local people affected by dementia, as well as members of Tytherington Family Worship Church, was also buried. The time capsule will be dug up in 2079, on the 100th anniversary of the church, by which time it is hoped that a cure for dementia may have been developed.

All those who attended also received a free gift of a pack of forget-me-not seeds. Attendees are encouraged to plant the seeds, symbolically helping to sow ‘seeds of kindness’ and increase awareness of what more local people can do to support this important cause.

The event was part of the wider local 'Walk a mile in my Shoes' group’s effort to raise awareness of dementia. Founded by three local dementia carers and residents, Jean Atherton, Pam Jagger, and Gill Lancaster, the initiative encourages local residents to recognise the need to be supportive of those with this condition.

Speaking after the event, David said, "I was very pleased to participate in planting the tree of remembrance at this moving and supportive event. This was a positive way to encourage greater awareness of carers and those with dementia and how we can all play a part in spreading the seeds of kindness and improving awareness of this condition, and support those affected by it.”