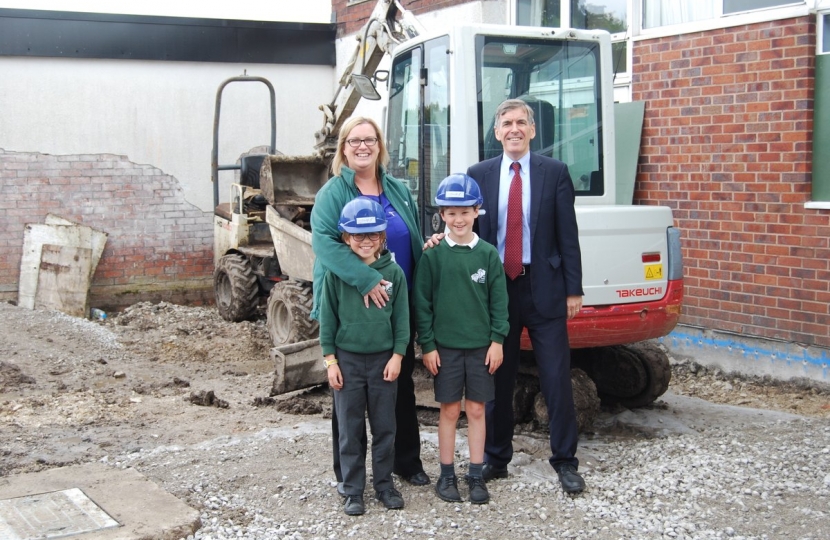 Ivy Bank School pupils were full of questions when local MP, David Rutley, visited to support the school's ongoing focus on our democratic processes and to learn more about the construction of the school’s new hall extension.

David was also given a tour of the school by its recently-appointed headteacher, Mrs Gill. As well as reviewing some of the school improvement initiatives Mrs Gill has successfully taken forward in her new role, David had the opportunity to see work on the construction of the school's new hall extension, which began earlier this month.

The “Hall for one...to hall for all” project has been a longstanding aspiration for the school, creating a new, purpose-built space for the school community to come together and enjoy. David was very pleased to see the positive progress that is being made to deliver this project, in the first phase of ‘The Ivy Bank Big Build’. Mrs Gill explained that families of pupils, both present and past, as well as local businesses and the wider community are being invited to sponsor the hall extension, with a minimum £20 donation. Sponsors will then have their name on a plaque which will be displayed as part of Build. Anyone who would like to contribute sponsorship of the project can contact the school by telephone on 01625 448014, or by email at admin@ivybank.cheshire.sch.uk

On his visit, David also addressed key stage 2 pupils in a specially-organised assembly. He answered questions about his work representing Macclesfield in Parliament, as well progress on his local campaigns, such as continuing to take forward initiatives to support the regeneration of Macclesfield town centre, and the importance of taking action to support young people’s mental health. David was also impressed to learn more from Mrs Gill about the school’s new ‘Eco-disco’ ethos.

Speaking after his visit, David said, "It was great to once again visit Ivy Bank School, particularly as part of its programme on our shared democratic processes. The pupils' questions on the importance of Parliament and our democratic institutions were impressive and well-thought through. I was also pleased to see progress being made on the new school hall. It will have a vital role to play in helping the school build on its many strengths, and I look forward to visiting Ivy Bank School again, to see the hall when it is completed."