National Citizen Service Up And Running In Macclesfield 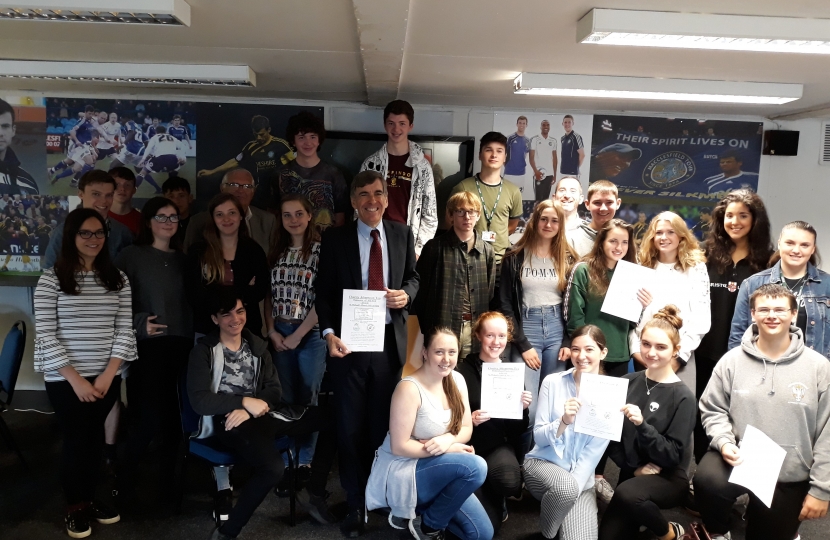 The National Citizen Service (NCS) is once again running in Macclesfield this summer, and local MP, David Rutley, met with some of the motivated young people taking part in the programme, to hear more about their experiences.

The group of young people from across Cheshire East met with David at Macclesfield Town Football Club. At their meeting, David learned that the students were planning the third stage of their NCS course, in which they were tasked with designing and delivering a new social action volunteering project that would make an impact in the local community.

The young people were split into two groups. The first planned to fundraise for local charities through bake sales and cake stalls, and the other by doing a sponsored walk and an afternoon tea. As well as being impressed by the commitment the young people taking part demonstrated for their local communities, David was pleased to see how the skills and knowledge they had acquired through the NCS course had boosted their confidence.

The NCS a life-changing programme open to all teenagers aged 15-17 to support them to discover who they are and what they can do. Over 500,000 young people across the country have already taken part in the scheme since its launch in 2011. There are four stages to the course, which generally runs during the summer holiday: adventure (when participants take part in challenging outdoor activities designed to build teamwork); discovery (when participants live away from home to develop independence, usually in university halls); social action; and finally a celebration when the young people can look back with pride at all they have achieved during their course.

Speaking after his visit, David said, "As I was able to see clearly for myself, participation in the National Citizen Scheme has made a clear and positive difference for these local young people, helping them to build new skills, boost their confidence and strengthen their sense of community spirit. I wish them every success in taking forward their social action projects, and I hope that many more local young people will look into the benefits of taking part in this worthwhile and fulfilling programme."

Let's Give Local Businesses Our Support Over The Weeks Ahead

Macclesfield MP, David Rutley, has given his strong backing to local businesses, particularly those in the retail and hospitality sectors, as we move to the next phase in easing lockdown restrictions.