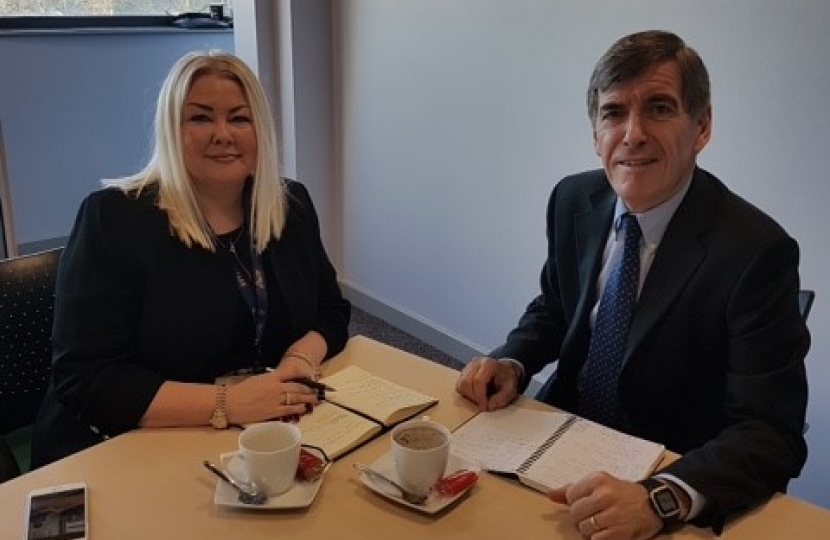 Macclesfield MP, David Rutley, recently met with Mrs Rachel Kay, Principal and Chief Executive of Macclesfield College, to celebrate the College’s success over the last year and discuss its ambitious plans for the future.

During the meeting, Mrs Kay explained that Macclesfield College has reached another significant milestone along its ongoing journey to becoming “outstanding” by being confirmed as East Cheshire’s first Further Education (FE) provider to offer and deliver the new School Business Professional Apprenticeship standard. The College is also proud of its successful FE academies for Football and Health & Social Care, as well as the Whites Chef Academy. The latter boasts celebrity TV Chef and Proprietor of the Church Green Inn in Lymm, Aiden Byrne, as its Patron.

Mrs Kay explained how these new developments have led to a record number of applicants for places at Macclesfield College. Also on the agenda were the Government’s additional support for apprenticeships and the new Kickstart scheme, which will help provide work opportunities for many 18-24 year olds. The College’s well-known capabilities in skills and training combined with its active apprenticeship programmes and strong relationships with local businesses will mean that it will play an important role in strengthening the local economy and protecting jobs in the months ahead.

Macclesfield College has also recently been announced as one of the third wave of Further Education providers chosen by the Department for Education to deliver new T-Levels across England, from September 2022. Originally announced in June 2019, T-Levels have been designed to be the technical alternative to A-Levels. Lasting two years, T-Levels combine theoretical, classroom-based study, practical learning and a substantial industry placement of at least 315 hours with a local employer working in partnership with selected FE providers, such as Macclesfield College.

After the meeting, David said “I am pleased to see that Macclesfield College is continuing to take positive strides on the road to becoming ‘Outstanding’. The College’s Academies are impressive and new T-levels will add another dimension to what it has to offer students. I am looking forward to working with the College in the year ahead – its proven track record with skills, training and apprenticeships will be important in our local economic recovery plans.”