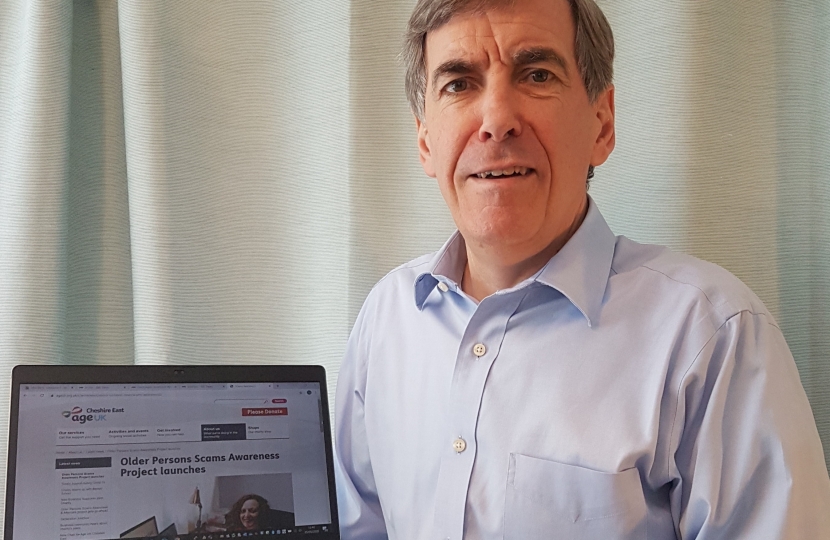 David Rutley, Macclesfield MP, has given his strong backing to an important new scams awareness campaign set up by Age UK Cheshire East. This is a timely and necessary campaign given the sad reality that there are people still seeking to exploit older people during the coronavirus pandemic.

David has campaigned to protect older people from scams for many years and he was pleased to see the campaign being launched. This project is important because Age UK Cheshire East has found that older people are particularly vulnerable to being victims of scams and doorstep crime, with 53% of people aged over 65 having been targeted by scammers and the average age of victims is 75. In Cheshire East, this could mean that as many as 22,525 older people have been targeted.

This two-year campaign, funded by the National Lottery’s Community Fund and the Garfield Weston Foundation, will consist of two connected elements – awareness and aftercare. The Age UK Cheshire East team will focus on delivering sessions to groups of older people raising awareness of scams, as well as explaining how to avoid and report them. In partnership with Cheshire East Council Trading Standards, they will also provide much needed aftercare for those who have sadly been victims of such crimes by providing one-to-one and group support. This is important as being scammed can seriously impact a person’s quality of life and mental wellbeing as victims often experience anxiety, embarrassment and even depression.

Speaking about the project, David said “I understand how scams cause enormous harm and distress to local residents, with older people being particularly vulnerable to them. I am pleased Age UK Cheshire East's new project has now started, as it will empower many older people to avoid being victims of scams and provide much needed aftercare support."