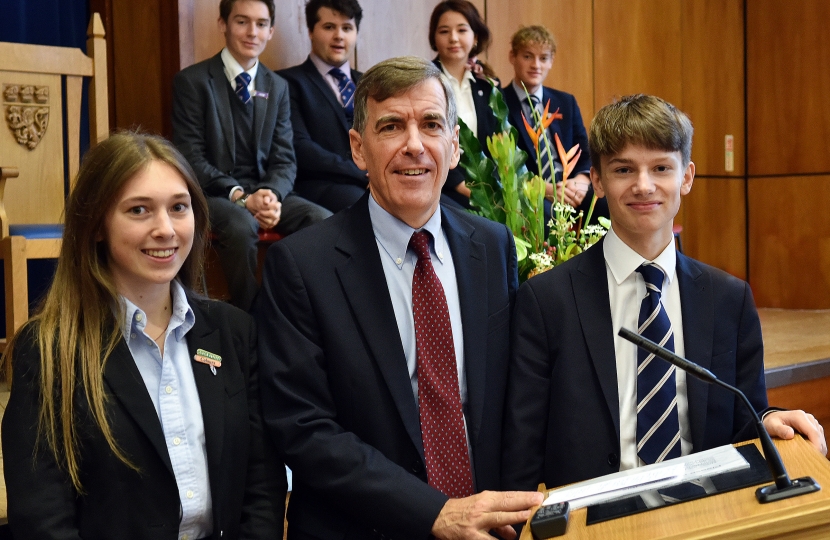 At a packed sixth form assembly at the King's School in Macclesfield, students had the opportunity to hear from local MP, David Rutley, when he was invited to visit the school to discuss our democratic institutions, and current affairs.

David addressed over two hundred of the school's sixth form students in their morning assembly, highlighting the importance of everyone, whatever their age, engaging with our democratic institutions and being active citizens. He highlighted what an important time in politics this is, both in relation to the UK’s withdrawal from the EU and wider domestic issues, and that this should help inspire young people to take an interest in current affairs and become more involved in the community.

David also spoke about his work as an MP and some of his local campaigns, such as promoting initiatives to support the regeneration of Macclesfield town centre, and safeguarding important local health services. David explained how the issues and concerns raised in his discussions with the many young people he meets on his visits to local schools help to influence his work, in such issues as the environment and mental health.

After the Assembly, David joined 30 of the school's students who are studying A Level Politics for a question-and-answer session. The session focused on the UK's constitution and democratic processes. The young people asked David a number of thoughtful and interesting questions, on national issues such as the UK's withdrawal from the EU, and the future shape of our constitution.

Speaking after his visit, David said, "With events in Parliament higher than ever on the news agenda, this was a great time to visit the King's School to meet with its sixth form students and highlight the importance of our democratic processes. I was impressed by the thoughtful questions I was asked by the students and their clear interest in current affairs and being active citizens."