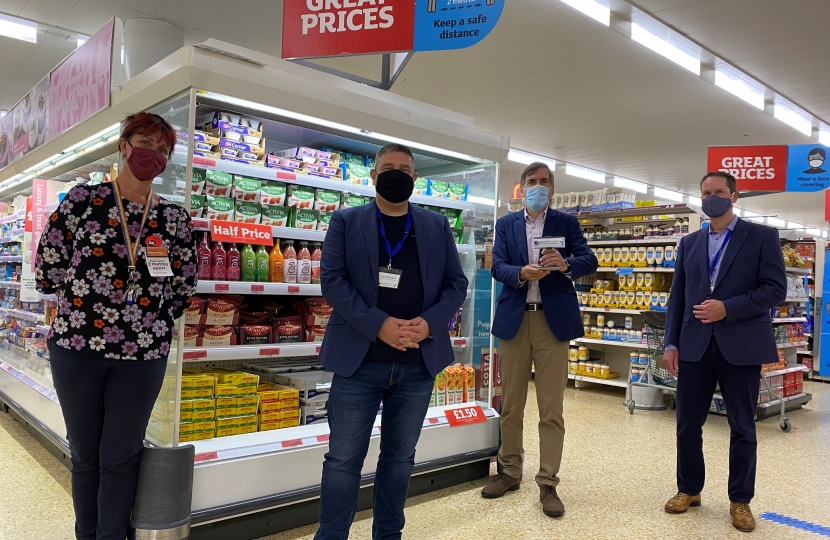 Bollington-based Aerofoil Energy is helping to lead the way on improving energy efficiency and temperature performance in retail refrigeration. After the company was recognised by Her Majesty the Queen and recently received a Queen’s Award for Enterprise in Innovation local MP, David Rutley, visited the Sainsbury’s Macclesfield superstore to see how effective and simple the ‘Aerofoil’ is in helping to reduce power consumption

Aerofoil Energy was founded in 2014 to develop an innovative and scalable solution to help tackle climate change by reducing carbon emissions in the retail sector. During David’s visit, he learned about the company’s patented wing-shaped ‘Aerofoils’, which are deployed in a vertical plane on the front of each shelf of a supermarket fridge. Instead of creating lift or downforce, as they would on an aeroplane or racing car, they have the effect of drawing the fridge’s cold air stream back into the cabinet, thereby preventing it spilling into the shopping aisle and wasting energy. The Aerofoils are manufactured by local businesses close to the company’s headquarters in Bollington. They are made from 100% recycled aluminium and are completely recyclable.

The Aerofoil product has achieved industry-wide adoption by many UK supermarkets including Tesco, Sainsbury’s, Asda, the Co-op and M&S. So far, Aerofoils have saved the sector £100 million in energy costs and already avoided some 150 thousand tonnes of CO2 emissions, savings that will continue to accrue year on year. Earlier this year, Aerofoil Energy received a Queen’s Award for Enterprise in Innovation because of their pioneering use of shelf-edge technology to improve the energy efficiency of display refrigeration.

David was joined on his visit by Mr Paul McAndrew, Founder and Technical Director, Nick Burke, Managing Director, and Maggie Taylor, Sainsbury’s Macclesfield Store Manager. Mr McAndrew updated David on the company’s exciting plans for the future explaining that it is focussing on expanding its services internationally, deploying its innovative product in the world’s largest bricks-and-mortar grocery retailers in Europe, the USA and Asia. In addition, Aerofoil Energy has an active research and development programme and is about to commercialise a new range of technology called ‘Vortex’ for several UK retailers, complementing Aerofoils and enhancing the energy efficiency of multi-deck refrigeration cabinets.

Speaking after the meeting, Mr McAndrew, Founder and Technical Director of Aerofoil Energy, said, “We’re delighted that a technology company from Bollington has been recognised with such a prestigious award.  Following our success in the UK, we’re now growing our business overseas, so we will be increasing our exports of Aerofoils, all of which we source from our suppliers here in Cheshire.”

Maggie Taylor, Sainsbury’s Store Manager, added, “It was my pleasure to host a visit with Aerofoil Energy and David in our Macclesfield store. It’s great to be the first supermarket to implement this innovative technology across our stores, improving the energy efficiency of our refrigeration and helping us to reach our target of being Net Zero by 2040.”

Following his visit, David said, “It was great to see how Aerofoil Energy’s innovative and simple products are helping to significantly reduce power consumption and tackle climate change. I was delighted that this local company has been recognised by Her Majesty the Queen by receiving a Queen’s Award. I wish the team continued success with their activities, which will be positive for the environment and will also help create more jobs locally.”