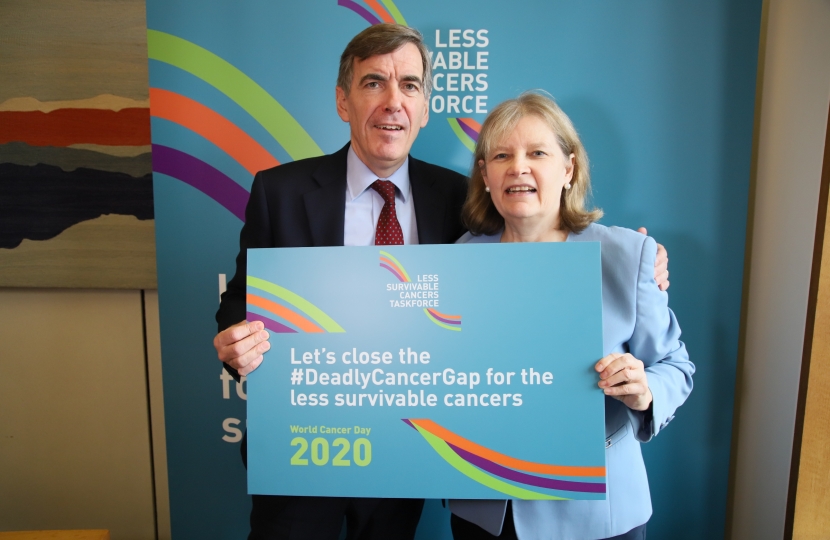 On World Cancer Day on 4th February 2020, Macclesfield MP, David Rutley, met with members of the Less Survivable Cancers Taskforce (LSCT) at a specially-organised event in the House of Commons, to hear their concerns about survivability rates amongst the six deadliest cancers over the last decade.

The LSCT represents six ‘less survivable cancers’ – lung, liver, brain, oesophageal, pancreatic and stomach – each with an average five year survival rate of only 14 per cent, which is why they are actively campaigning to put the spotlight on these serous conditions. The Taskforce, which also includes Action Against Heartburn, the British Liver Trust, Guts UK, Pancreatic Cancer UK, The Brain Tumour Charity and the Roy Castle Lung Cancer Foundation, aims to double the survivability of these cancers to 28 per cent by 2029.

At the event, David met with cancer specialists and patients with first-hand experience of these ‘less survivable cancers’. He discussed with them the critical situation for people diagnosed with these cancers and the urgent need for further focus of targeted investment in research, in order to make much-needed diagnosis and treatment breakthroughs.

Anna Jewell, Chair of the Less Survivable Cancers Taskforce added: “We are delighted that David shares our concerns about the inequalities in cancer outcomes. There are some cancers which have seen remarkable progress in survivability but others that are just as deadly as they were decades ago. Together, these ‘less survivable cancers’ make up half of all common cancer deaths in the UK. Today we are calling on the UK governments to commit to doubling survival rates from 14% to 28% by 2029 and I’d like to thank David for supporting our campaign to close the deadly cancer gap.”

Sarah Lindsell, Chief Executive of The Brain Tumour Charity, added: “Every year, thousands of people diagnosed with a less-survivable cancer, including those with brain cancer, are denied even the hope of a cure. Many are told they have only months to live. That has to change. We need more research and a committed drive towards improving survival for these cancers, so that fewer lives are cut brutally short and fewer families are left devastated by loss.”

Speaking after the event, David said: “It was an honour to meet with patient ambassadors for the Taskforce and to have the opportunity to highlight the pressing need for support for these less survivable cancers, particularly on World Cancer Day. Significant progress has been made in recent years in improving in treatment and prognosis for many cancers and I am grateful to the Taskforce for the important role it continues to play in promoting the need for further, targeted action to close the deadly cancer gap for these less survivable cancers”.