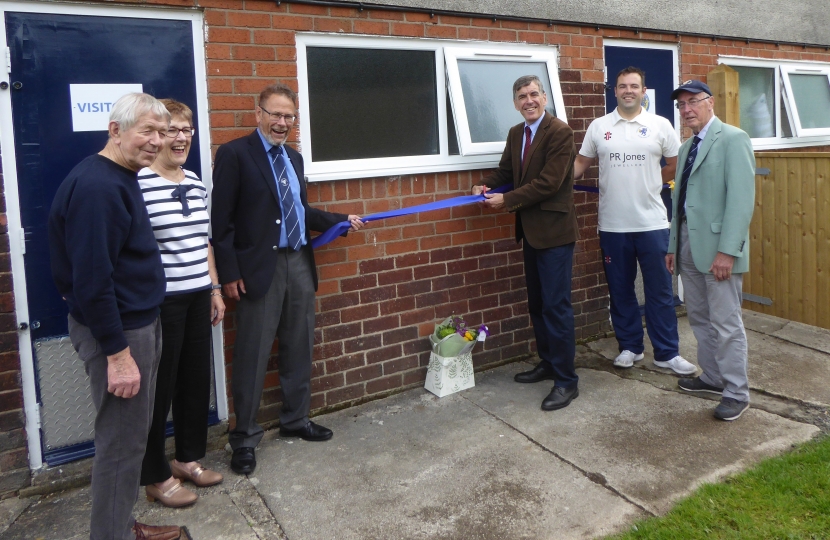 Macclesfield Cricket Club is batting for six following the refurbishment of the 3rd Team's dressing room in its Clubhouse, and local MP, David Rutley, was on hand to perform the official opening.

David was shown around the refurbished dressing room by Macclesfield Cricket Club Chairman, Simon Griffiths, and Club President, Roger Moss, and saw for himself the improved new facilities available for players to utilise. This includes new showers, windows and an extensive repaint, all of which was completed ahead of the start of this year’s season.

Current and former Club members, as well as players and friends and families, were present at the well-attended event at the Club's Victoria Road ground. Before cutting the ribbon, David gave a short address, praising the work of Macclesfield Cricket Club and highlighting its positive work encouraging young people to take up the game. He also thanked the volunteers who worked so hard to make the new facilities available to players, and do so much to support the Club’s work for the community.

The ceremony took place ahead of the 3rd team’s match against Cheadle Hulme. To celebrate the opening of the new dressing room, the team went on to win the match, to remain top of their league!

Macclesfield Cricket Club provides opportunities for boys and girls of all ages to play the game. Anyone interested in joining the club, or assisting it in any way, can telephone 01625 424249, or email macclesfieldcricketclub@hotmail.co.uk, for further details.

Macclesfield Cricket Club President, Roger Moss commented, “The old facilities did not do justice to the Club, with little having been done since the hockey club used them as changing rooms many years ago! I would like to pay tribute to the dedication of the volunteers who progressed the work, and especially the time invested by Sue Griffiths and Linda Wade”. On the day, Mrs Griffiths was presented with a bouquet by 3rd team captain Miles Horner.

Speaking after the event, David said, "I was pleased to open the 3rd Team's new dressing room and to see how the hard work of volunteers has created a more hospitable environment for the players. The new facilities have clearly had a positive effect on the players, with the 3rd team winning their match against Cheadle Hulme! I wish Macclesfield Cricket Club every success for the season ahead."