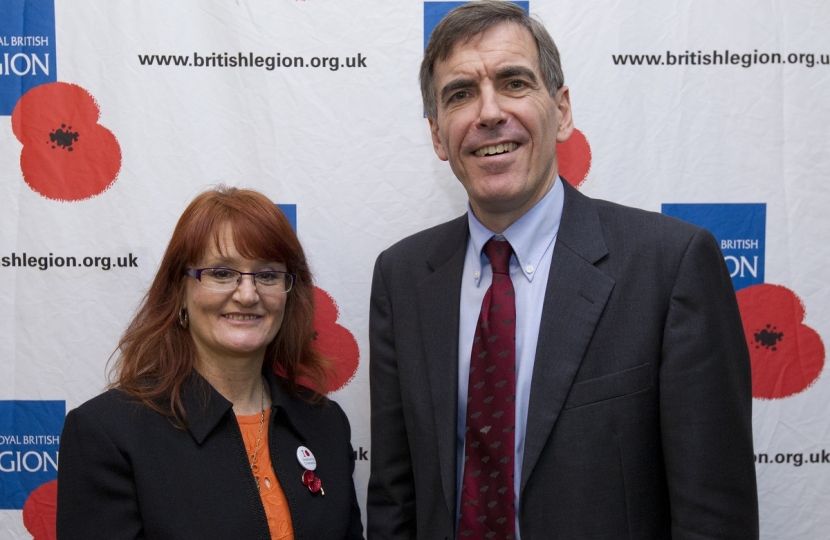 The Legion is the leading provider of welfare for the Armed Forces community.  David recently attended an event in the Houses of Parliament dedicated to showcasing the Legion’s work in the Macclesfield and Cheshire area.  David used the opportunity to discuss the changing face of Armed Forces welfare provision in the local community with Ms McKinnon.  The Macclesfield MP also found out more about the Legion’s work developing Community Covenants locally.

The Royal British Legion provides care and support to all members of the British Armed Forces, past and present, and their families.  As the nation’s leading Armed Forces charity, the Legion spends £84 million a year on vital welfare work, providing social, emotional and financial care and support to serving and ex-Service people and their families.  Approximately 9 million people in the UK are eligible for the Legion’s support and it is proud to serve those in need, today and for the rest of their lives.

Gillian McKinnon, the Legion’s Area Manager, said, “It was great to see David; we really appreciated him taking the time to drop in.  Many people don’t realise that we spend £1.6 million every week in direct welfare support for the Serving and ex-Service community and their families, so we were delighted to tell David about the range of services we provide”.

David said, “It was good to meet Gillian, who made it clear that the Legion’s work does not stop on Remembrance Day.  Providing assistance for members and former members of the Armed Forces, who have been injured, or who need help in other ways, as well as their families, is a full time job.  It is vital that we as a nation honour the sacrifices made by our Armed Forces, and I am proud to support the work of The Royal British Legion.”