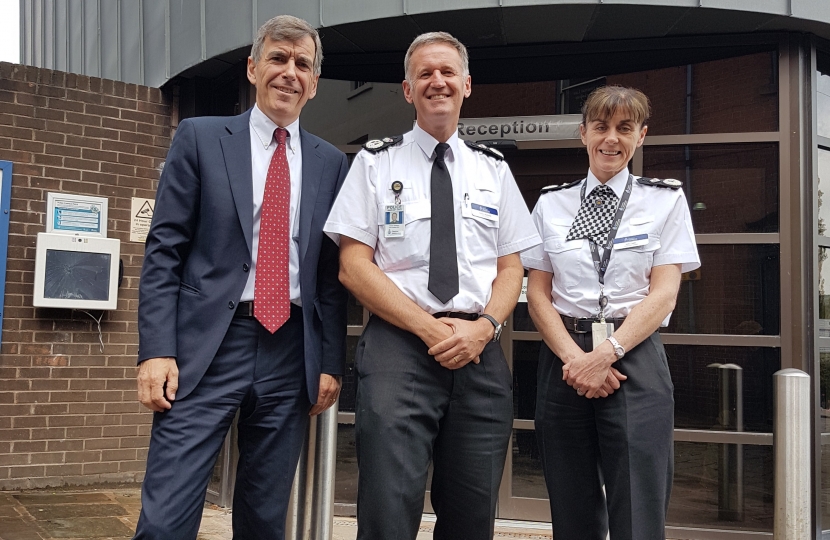 County lines crime is where organised criminals from major cities such as Liverpool or Manchester expand their drug networks to neighbouring areas, including Macclesfield and other local communities, bringing with them serious criminal behaviour such as violence, abuse and criminal exploitation. This impacts on communities across Cheshire, with vulnerable children, young people and adults being recruited to transfer drugs or other contraband on behalf of these criminal networks, with their homes used as bases for organised criminal gangs.

David and the Chief Constable discussed the range of important work underway in Cheshire to tackle these crimes and prevent young people in Macclesfield and elsewhere from being drawn into this harmful criminal activity. This includes campaigns on social media and a continued focus on important neighbourhood policing, helping to build links with communities to identify where these serious crimes may be taking place. David was assured that Cheshire Constabulary will continue to work to disrupt these organised criminal gangs, so that young people and vulnerable adults in Macclesfield are better protected.

Mr Martland and Ms Cooke both bring considerable experience of tackling harmful county lines activities from their previous roles in Merseyside, where they served in a variety of uniformed and non-uniformed roles.

At the meeting, David also highlighted concerns about the need to focus on rural crime affecting our local villages, which is also an ongoing priority for Cheshire Constabulary.

Speaking after the meeting, David said, "I was pleased to meet with Mr Martland and Ms Cooke and I am grateful to them for coming to Macclesfield to discuss these important policing issues for our local communities. County lines activity can have a serious impact on the lives of vulnerable young people and it is vital that tackling these harmful crimes continues to be a top priority. It is clear that Mr Martland and Ms Cooke bring considerable experience to their roles, including from their previous postings in Merseyside, and I look forward to continuing to work with them on important policing issues for local communities."