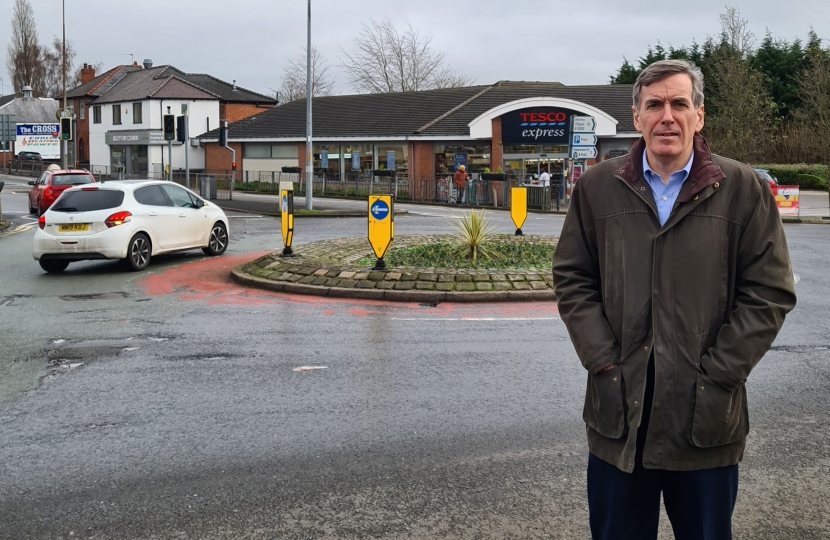 David recently joined a virtual Henbury Parish Council meeting at which Councillors set out their strong concerns, and those of many local residents, following an application by a developer of one of the major Chelford Road house building schemes seeking to remove conditions to improve the strategic roundabout junction before new homes are moved into.

Having had long-standing concerns about the planned developments for hundreds of new homes on Chelford Road, David has written to Cheshire East Council setting out his strong objections to this application and to support the submission made by Henbury Parish Council and concerns raised by Save Macclesfield Green Belt group and residents in Broken Cross and more widely in Macclesfield. He believes that the condition to improve the junction was a major commitment made at the time when initial approval of development on Chelford Road was granted and that it would not be right to backtrack from this position.

There are existing major issues regarding traffic volumes, particularly at peak travel times, at the Broken Cross junction and the related roads are an Air Quality Management Area. It is now well recognised that poor air quality has a major impact on health, and the fact that Broken Cross is also on a busy walking route to local schools should be a source of real concern to Cheshire East Council.

In his submission to Cheshire East Council, David highlighted that the traffic modelling it commissioned to inform the Local Plan was based on 2012 traffic volumes and lower planned housing development levels than are currently envisaged. He also pointed out that the Council’s recently commissioned traffic study was carried out at a time when pupils were not attending Whirley School and traffic volumes have been reduced due to the pandemic. Henbury Parish Council has highlighted that the traffic volume figures in the study are not representative of traffic levels at this busy junction and, as a result, development should not be carried out on the Chelford Road sites without improvements to the Broken Cross junction taking place.

After his meeting with Henbury Parish Council, David said, “There has been strong local opposition to the extensive planned development on Chelford Road over many years. I share these concerns and it would be wrong for development to now go ahead without progressing with the pre-agreed improvements at the Broken Cross roundabout junction. That’s why I am calling on the Council to refuse the application to remove the previously agreed conditions to enhance the junction.”

Andrew Hodgson, Director of Andrews Pharmacy, explained how its pharmacy on Kennedy Avenue, Macclesfield is helping to show the way forward for pharmacy-led vaccinations across the country when local MP, David Rutley, visited recently.