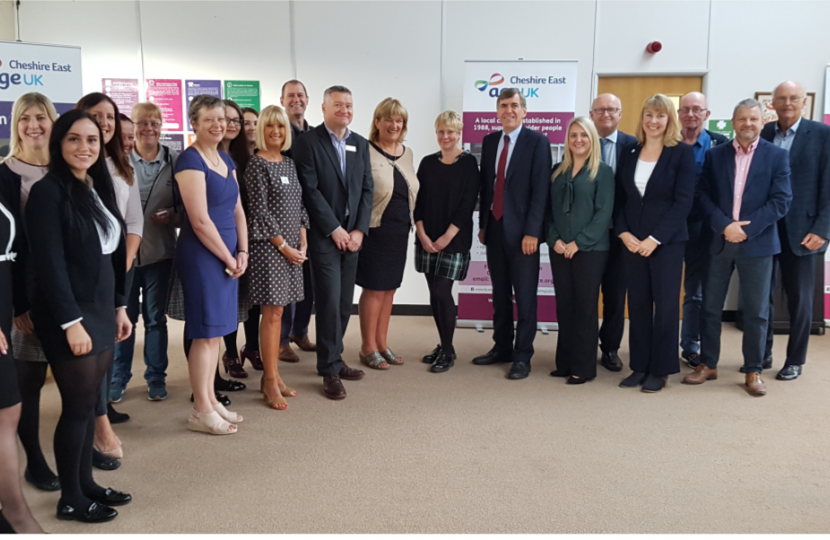 Age UK Cheshire East is currently developing a new initiative to help protect older local residents from scams, and local MP, David Rutley, met with the organisation at one of its regular business breakfasts, to discuss this and to give his support to this much-valued charity.

At the meeting, David was joined by Age UK Cheshire East's Chief Executive, Damon Taylor, who explained that the organisation's research has demonstrated that older people in the local area are especially vulnerable to doorstep crime and scams. As a result, Age UK Cheshire East is developing a project to provide much-needed support and aftercare for scam victims, as well as develop a dedicated network of community volunteers to help raise awareness about potential scam threats and act as 'eyes and ears' in local communities. The charity hopes that its strong and trusted name recognition would encourage more victims of scams to approach it to report their experiences and seek help.

The charity is currently seeking funding for the project, with a proportion of the necessary funds already raised. David, who has strongly supported other initiatives to help people protect themselves against scams and fraud, including Scams Awareness Week, pledged his strong support for the proposed project and assistance in helping the charity to secure the required funding.

Mr Taylor and David also discussed the other important work that Age UK does in local communities, including its support for its local Men In Sheds project in Macclesfield. This initiative is a positive example of how the charity is working to help improve the social and emotional wellbeing of older men.

Age UK Cheshire East provides much-needed services, advice and support to older people across communities in the Cheshire East area and campaigns to achieve positive change. The charity focuses, in particular, on tackling isolation and loneliness, improving services, inadequate care and support, discrimination and a lack of respect faced by older residents. More information about the services provided by the charity can be found at: www.ageuk.org.uk/cheshireeast

Speaking after his meeting, David said, "Scams cause enormous harm and distress to local residents, with older people particularly vulnerable to them. Age UK's new project is a positive response to this issue, and I was pleased to learn more about its important plans. I will continue to support Age UK in its work to protect older people from the scourge of such scams and in achieving its wider objectives within the community."