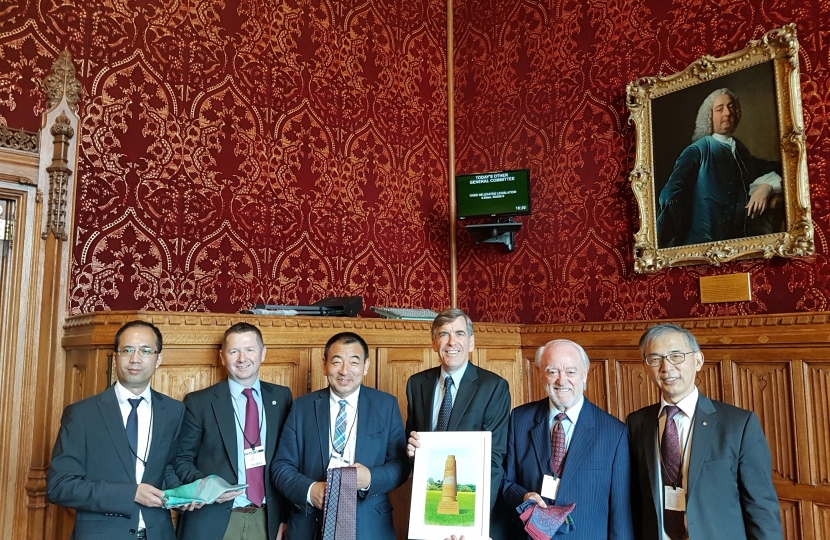 The ancient Silk Road was the top of the agenda in Parliament recently, when Macclesfield MP, David Rutley, welcomed a group of Chinese representatives to the Palace of Westminster, to discuss proposals for a new monument for the western end of the Silk Road in Macclesfield.

At the meeting, which was also attended by Macclesfield silk manufacturer, Ron Smart, and Pete Turner, Clerk of Macclesfield Town Council, David was presented by the Chinese visitors with an artist’s impression of the proposed monument, which it is planned would depict the route of the ancient Silk Road from Xian to Macclesfield. David thanked the group on behalf of the town for the print, and expressed his support for this initiative.

David also emphasised the enduring and special bond that is still felt in Macclesfield to its silk heritage and its historical links with China. The group discussed how to further promote trade between Macclesfield and China and build on the already well-established links created by the ancient Silk Road, of which Macclesfield was the western terminus, with Xi’an its final destination in the east.

Mr Smart was able to highlight some of the high-quality products, such as silk ties, pocket squares and scarfs, that are manufactured and finished at his business in Bollington, using silk obtained from China. The finished products are then sold abroad, including in China, where the story of Macclesfield's silk heritage is a key factor in promoting strong sales.

Speaking after the visit, David said, "As this visit clearly demonstrates, the bonds linking Macclesfield and China, at each end of the Silk Road, are growing stronger. It is positive that business people like Ron Smart are working to strengthen and develop these links further through increased trade. I will continue to actively working with Ron and Macclesfield Town Council to further promote our town's rich silk heritage and build further opportunities to create even stronger ties between Macclesfield and China."