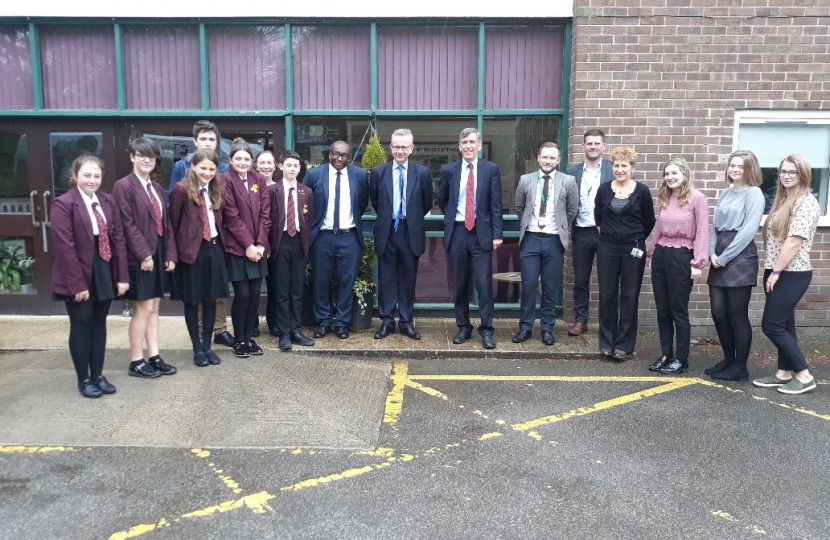 Members of Tytherington School's 'Tythy Goes Green' group were visited recently by a special guest, when Secretary of State for Environment, Food and Rural Affairs, the Rt Hon Michael Gove MP, joined them for a question-and-answer session, along with local MP, David Rutley.

The active group gave a powerful presentation to the Secretary of State, highlighting the positive initiatives that they have introduced at the school to help improve the school environment and raise the profile of important green issues. These include: committing to eliminating single-use plastic waste at Tytherington School; introducing a community pen recycling scheme; and helping to improve the school's canteen waste footprint. The students then had the opportunity to ask Mr Gove and David - who is also a Minister at the Department for the Environment, Food and Rural Affairs - a range of questions on national policy affecting the environment, such as reducing plastic waste; action to cut the UK's carbon emissions, and expanding the UK's forest footprint.

Mr Gove, who was visiting Tytherington School at David’s invitation, congratulated the young people on their clear commitment to driving positive change in these important areas and encouraged them to continue to take an active interest in them. He also thanked the teaching staff involved in supporting the group, for their work in helping to take these projects forward. The Secretary of State also received a letter from Tythy Goes Green member Esther Bird, setting out a number of requests for action from the Government.

The group, which was elected by fellow students in September 2017, was established to raise awareness of green issues around the school, and to help improve the school environment. Since then, as well as the positive measures mentioned above, the students and staff involved have delivered assemblies, raised money at the Summer and Christmas Fairs, and delivered a presentation at last year’s Barnaby Festival. Staff at Tytherington High School are rightly proud of all that the students have achieved.

During his visit, the Secretary of State also met with members of Tytherington High School's Young Enterprise Group, who have reached the North West Young Enterprise semi-finals, with their reusable bamboo travel cup business. This initiative has also led to a reduction in single use plastic at the school.

Mr Emmanuel Botwe, Headteacher of Tytherington School, said: “We were very honoured to be selected for a visit by the Secretary of State and Mr Rutley. We regard this as recognition of the good work we have already started at the school. We recognise that there is much for us to do. We have already introduced a range of initiatives such as recycled school ties and several recycling schemes. We are planning a curriculum which will educate our students on how to make more environmentally sustainable decisions. I’m extremely proud to have so many community-minded and articulate students at our school.”

Speaking after the visit, David said, "The commitment and enthusiasm demonstrated by the Tythy Goes Green group is impressive and inspiring. The students have already shown the positive changes that can be made to reduce the use of plastics and improve our impact on the natural environment, with more exciting plans in the pipeline. I am pleased that they were able to meet with the Secretary of State, and share their ideas and views with him."