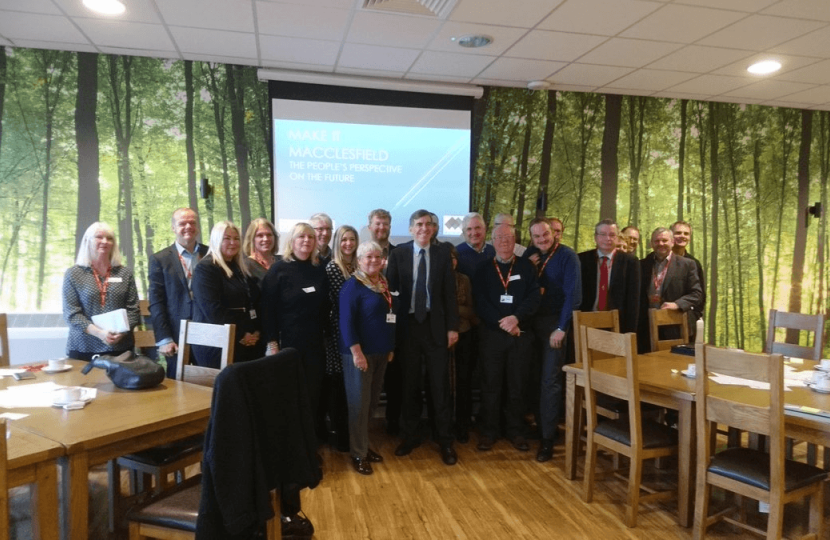 A Town Centre Regeneration Forum that took place on Friday 30th November designed to engage the community in the development of important plans to revitalise the town centre, was joined by local MP, David Rutley.

The Forum meeting, an initiative organised by Make it Macclesfield was kindly hosted by Macclesfield College in its new Whites Chef Academy, brought together 26 representatives from local businesses, community groups, and elected officials, to collaborate in supporting the ongoing work to develop a positive vision to realise the clear potential that exists to make Macclesfield a more distinctive destination for shopping and services, and deliver the town centre that local residents want and deserve. Some of those represented included AstraZeneca, and the Enterprising Macclesfield and Macclesfield Means Business groups, which represent a wide number of local businesses, across a range of sectors.

The independently chaired by meeting gave all attendees the opportunity to table their views on the best approach to regenerating the town centre, with the objective of reaching an initial consensus on what a ‘fit for purpose’ town might look like, together with presenting ideas on how to approach the challenge of delivering of this vision. There was also strong agreement on the importance of Cheshire East Council engaging with local stakeholders, as its Strategic Regeneration Framework, which is intended to bring a more co-ordinated approach to the regeneration of Macclesfield town centre, is taken forward in the months ahead.

David also updated the meeting on the further £5 million investment in the public realm in the town centre that has been secured, on top of the £1.4 million already allocated for this purpose. This was agreed following David's conversations with Cllr Ainsley Arnold, the Cabinet Member for Housing and Regeneration at Cheshire East Council, and confirmed by Cllr Rachel Bailey, the Leader of the Council.

The output from the meeting will now be shared with the recently-established Cheshire East Macclesfield Town Centre Liaison Group, formed by Cheshire East Council.

Make it Macclesfield also intends to hold a public meeting in the near future, to enable the wider community to contribute to the debate on how to deliver on the town centre regeneration plans.

Speaking after the meeting, David said, "It is clear that there continues to be strong commitment from across the local community, including businesses and other important local organisations, to maintain the focus on revitalising our town centre. This remains a key priority for our community. The increased investment of a further £5 million in the public realm is a positive step, and I will go on working with these organisations, to help deliver on the clearly-stated wishes of local residents to see a greater focus on regenerating Macclesfield town centre."