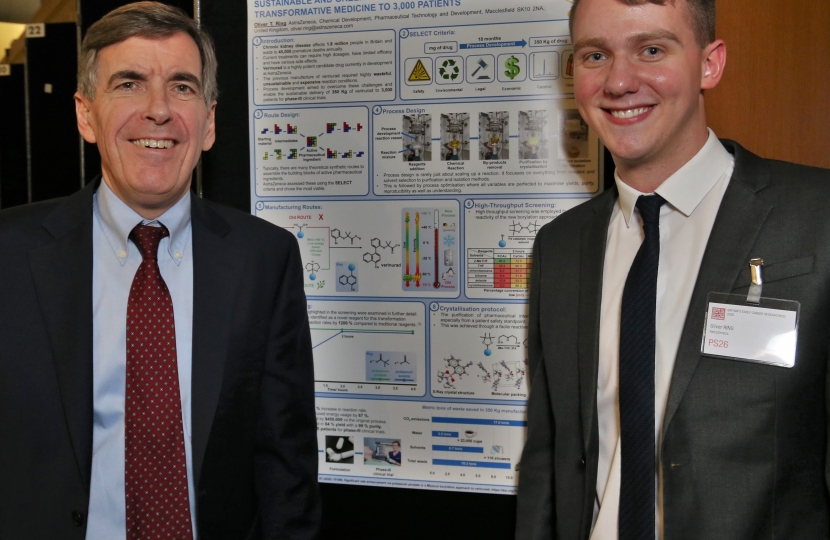 Recently, local MP, David Rutley, met with Mr Oliver Ring, an AstraZeneca graduate chemist from Macclesfield, to congratulate him on being selected to attend the Chemistry section at the STEM for Britain Awards.

The STEM for Britain Awards is a major scientific competition, open to early career researchers in Science, Technology, Engineering and Maths. The event is organised by the Parliamentary and Scientific Committee and is supported by numerous leading scientific and technological societies and institutions, including the Royal Academy of Engineering. Every year an awards ceremony is held in Parliament to provide an opportunity for these researchers to present their research and potentially win awards and cash prizes.

Mr Ring was invited to the STEM for Britain Awards to display a poster on his work in the field of chemistry. David was pleased to attend and learn more about his project, and the positive impact it has had at AstraZeneca.

The event provided an excellent opportunity for MPs and Peers to learn about some of the excellent work undertaken by researchers from across the UK in the fields of biosciences, chemistry, engineering, mathematics and physics.

Speaking after the event, David said “I was pleased to see local scientific research represented at such a high level and it was a pleasure to attend the event. STEM subjects are vital for our local, world-leading, life science businesses. Mr Ring’s achievement is a clear reminder of the high standard of scientific skills and expertise that we are fortunate enough to have in and around Macclesfield.”