'The Time Is Now' To Tackle Climate Change 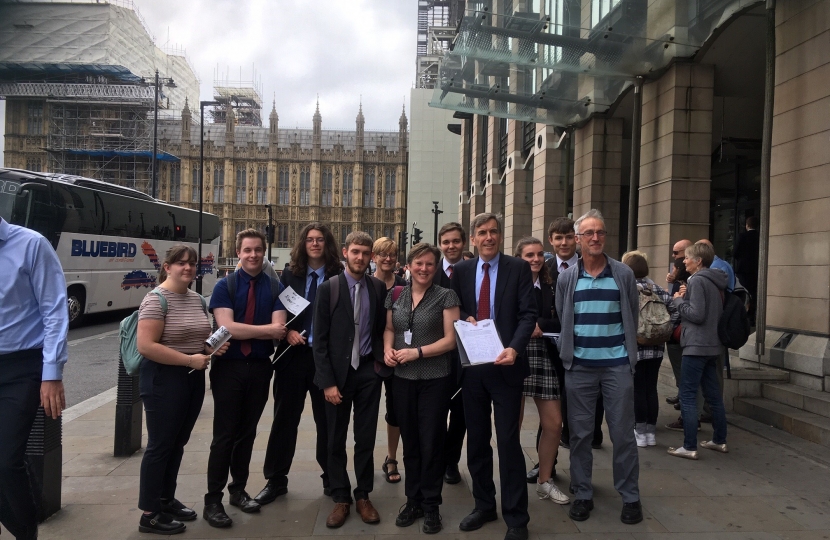 ‘The Time is Now’ was the strong message local MP, David Rutley, heard when he met with a group of constituents from Macclesfield, at a mass lobby of Parliament on Wednesday 26th June, which called on Members of Parliament to take urgent action on the natural environment and climate change.

At the lobby, David met over a dozen constituents, including a number of students from All Hallows Catholic College in Macclesfield. As well as listening to concerns on a range of environmental and sustainability issues, both local and national, David received a petition from CAFOD, signed by many local residents, in support of strong action to tackle climate change and to help create a healthier environment for people and wildlife in Macclesfield, the UK, and across the world.

David updated constituents on the positive commitments made by the Government to take this important agenda forward and to ensuring that we leave the environment in a better state than we found it in, including the recent legally-binding target of achieving net zero emissions by 2050. He also spoke about his work as a Minister at the Department for the Environment, Food and Rural Affairs (Defra), to support this vital agenda. This includes the creation of a new Northern Forest, and the planting of 11 million new trees by 2022.

This was the largest ever environmental lobby of Parliament, with over 12,000 people present, from all corners of the UK, and at least 300 MPs meeting with local constituents. At 2.00 p.m., lobbyists symbolically rang phone alarms and alarm clocks, to highlight that ‘the time is now’ to act on tackling climate change. The day also saw leaders from different faith communities, including former Archbishop of Canterbury Rowan Williams, gather for a ‘Walk of Witness’ from Trafalgar Square down Whitehall.

The lobby was organised by The Climate Coalition and Greener UK, two groups combining more than 130 organisations, representing over 15 million people, ranging from aid agencies CAFOD, Christian Aid and Islamic Relief to community groups including the Women’s Institute and environmental groups such as WWF, National Trust and Friends of the Earth.

Speaking after the lobby, David said, “It is clear that addressing the threat posed by climate change is one of the most pressing challenges that we face. I am very pleased that so many people from Macclesfield – and young people, in particular – were present for the lobby, and took the time to meet with me to discuss these vital issues. I will continue to do all I can as an MP and as a Minister at the Department for the Environment, Food and Rural Affairs, to help deliver on the new net zero 2050 target and ensure we leave a cleaner and healthier world for future generations.”