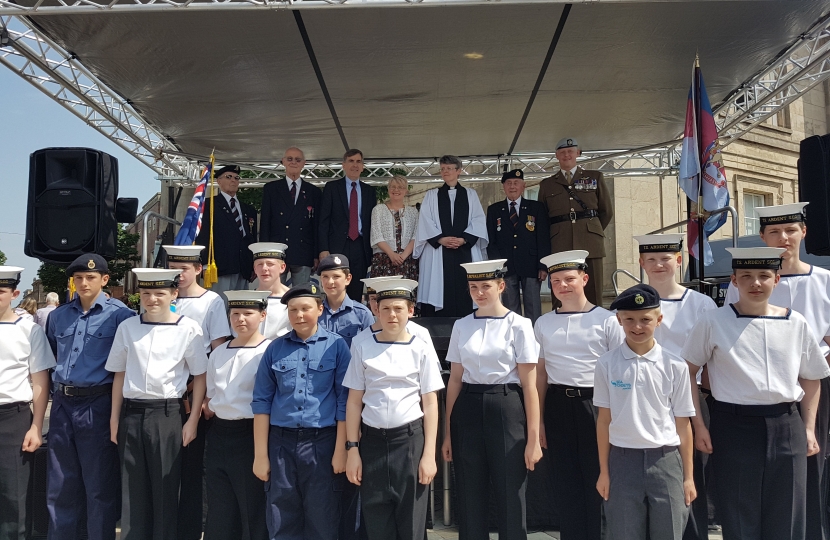 The parade made its way through the town, starting from Duke Street and ending in Market Place, where the salute was taken from Macclesfield Town Hall by Major J P Morton-Race AAC, of the Royal Air Force’s 22 Group, a local lynx helicopter pilot. In addition to David, the Deputy Mayor of Macclesfield, Cllr Sarah Bennett-Wake, was also present.

After the parade, there was a short service of thanksgiving and minute’s silence, enabling those present to reflect on the remarkable sacrifice of those who gave their lives in conflicts past, and the commitment and bravery of Armed Forces personnel today.

As well as the parade, there were entertainments in the form of local military bands, school choirs, and dance groups, as well as food stalls, and a number of vintage military and emergency service vehicles on display, all of which helped to make the afternoon a fun event for all the family. The afternoon culminated with a spectacular fly-past, featuring a typhoon jet and a chinook helicopter.

The event was once again organised by the Macclesfield branch of the Royal British Legion (RBL), with the support of other local organisations that work to assist Armed Forces members and veterans. These include: Age UK Cheshire East; Macclesfield Armed Forces Breakfast Club; the Veterans Hearing Fund; the Army Families Federation; and St John Ambulance.

Speaking after the event, David said, “Armed Forces Day is very important opportunity to reflect on the immense sacrifice, courage and dedication of our Armed Forces personnel, and to remember those who have made the ultimate sacrifice in defence of our country. It was an honour to take part in this event and I am grateful to all local residents who supported it, and to all those organisations, not least Macclesfield Royal British Legion, who helped to make it so memorable.”