Stamp Of Approval For Sutton Post Office And General Store 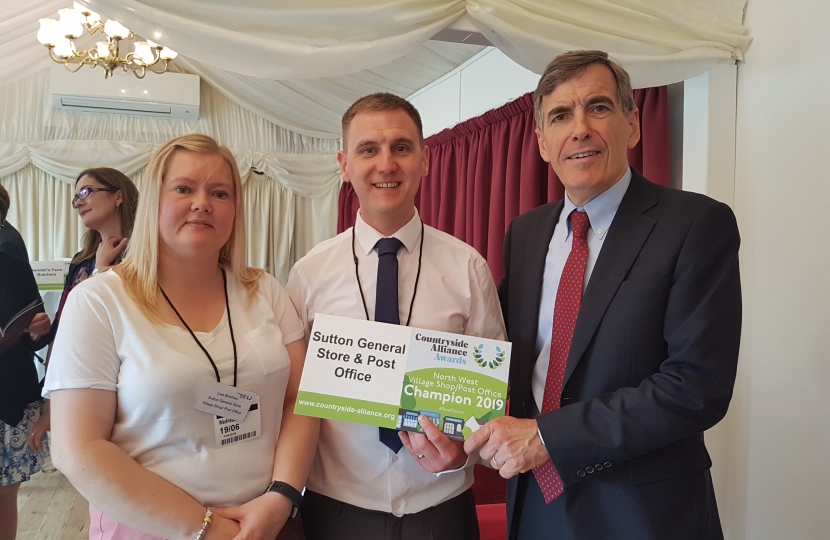 Alan and Lisa Bolshaw, owners of Sutton Post Office and General Stores, were Highly Commended in the national Countryside Alliance Awards, and local MP, David Rutley, met with the couple at the finals ceremony in Parliament's House of Lords, to congratulate them on this impressive achievement.

The store was nominated in the village shop/post office category, first topping the regional awards for the North West, before receiving this impressive recognition in the national finals.

The judging panel highlighted how the shop has truly become a cornerstone of the village, acting as a focal point for the community and helping to support the local economy. They also praised the store's emphasis on aiming to source as much of its stock from the local area, where possible, with spirits supplied by the Forest Distillery in Macclesfield Forest, and craft beer from the Wincle Brewery. Fruit and vegetables are also locally-sources whenever possible, as Alan’s background is in greengrocery, and the shop now excels in this area.

At the awards ceremony, Alan and Lisa explained to David the exciting future plans they have for the shop. These include a refurbishment of the store's interior, and major building works to re-lay the carpark and expand outside to create an area for charities to promote themselves, run events and host a farmers’ market.

This was the 14th Countryside Alliance Awards, known as the 'Rural Oscars'. Over 17,000 entries for five categories were received from across the country, with the five finalists from each UK region making it to the finals at the House of Lords.

Speaking after the awards ceremony, David said, "I am delighted that all of Alan and Lisa’s hard work and commitment into breathing new life into their business has been recognised in these awards. They continue to provide a real service to the residents of Sutton and the surrounding area. I wish them every success making the store even more at the heart of the community."