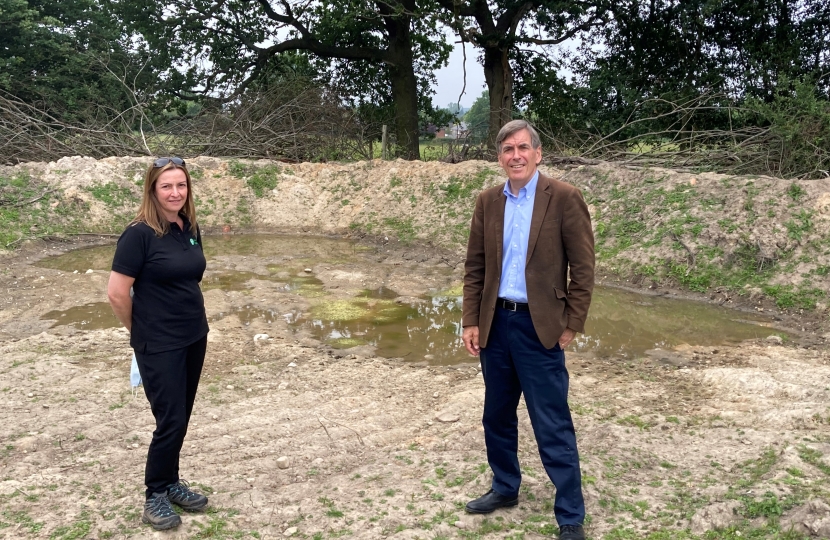 Tackling future flood risk was top of the agenda at a recent meeting in Poynton David Rutley, local MP, held with Lesley Worswick, North West Area Director for the Environment Agency. This has been an important priority for Poynton Town Council, Poynton Flood Action Group, many local residents and David, following the severe flooding incidents in the village in both 2016 and 2019.

During the meeting, David was taken to sites where the Environment Agency has actively worked with local stakeholders, including the Cheshire Wildlife Trust and landowners, to help slow the flow of water upstream at times of severe rain, involving natural flood management techniques.

David visited a newly established bund put in place near a water course to retain flood water which is then able to soak away as water levels subside. He also viewed new leaky dams on a local brook that also play an important role in stemming the flow of flood water upstream. The embankment along the Armcon industrial estate has also been repaired.

Ms Worswick stressed the importance of encouraging more local landowners to get involved in such schemes. The visit highlighted how many more local homes could be better protected, if additional landowners would make land available for these initiatives. David has given his backing to the Environment Agency’s important requests for support and further details on forthcoming schemes are available here: https://www.gov.uk/government/publications/environmental-land-management-schemes-overview.

As well as visiting these sites, David and Ms Worswick discussed the importance of establishing a comprehensive action plan to make clear what actions have already been taken and what further steps are required to address local flood risks. David will continue to work with the Environment Agency and other key stakeholders, including United Utilities, Cheshire East Council and local residents, in taking forward this task.

After the meeting, David said, "Following the recent serious flooding incidents, it is positive to see the progress that is being made. I am grateful to the Environment Agency for the action that has been taken to help keep flood water upstream and away from the village. There is still more work to do with this vital task and in clearing culverts. That’s why, nearly two years after the 2019 flood events, it is more important than ever to complete the task of developing a thorough action plan, so that each party knows what steps need to be taken to further reduce the risk of flooding in the future."

It’s time to speak up for our local villages and protect their integrity and unique identities, as Cheshire East Council is now consulting on the future of many Parish Councils as part of its Community Governance Review.