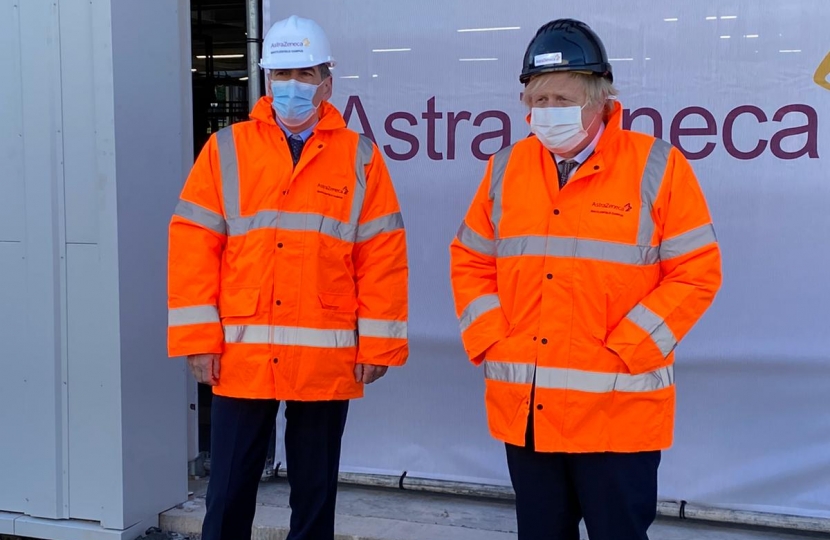 The Prime Minister, Boris Johnson, saw a major investment of £380 million by AstraZeneca in its Macclesfield Medicines Manufacturing and Development campus during a visit to the site on Tuesday 6th April.

The investment covers new advanced medicines manufacturing and packing facilities at the campus for oncology therapy Zoladex, and a new Global Medicines Packaging Centre which ships more than 50 medicines to 130 countries. The campus is a critical part of the company’s global operations and the new investment helps boost manufacturing on site and the work of its highly skilled team, and is a huge vote of confidence in the local economy.

Macclesfield’s MP, David Rutley, joined the Prime Minister during the visit which was initially planned to announce the investment in March 2020, but was postponed due to the first lockdown. Since then, David has worked closely with AstraZeneca and the Prime Minister’s team to reschedule while construction work on the new facilities continued at pace. Fitting out the complex manufacturing processes will take another 2 years.

During his visit, the Prime Minister recognised how AstraZeneca has played a vital role in developing and rolling out the Oxford-AstraZeneca vaccine and in helping the country move along the roadmap out of lockdown and towards more normal times. His visit also highlighted the work that the company does in researching and treating many other serious medical conditions and AstraZeneca’s importance in the UK’s growing life sciences sector. The Prime Minister also discussed with AstraZeneca CEO Pascal Soriot, who joined the visit by video call, the company’s Ambition Zero Carbon project to eliminate carbon emissions from its operations by 2025.

AstraZeneca’s Macclesfield campus is the largest pharmaceuticals manufacturing site in the United Kingdom. It is home to a team of almost 4,000 highly skilled staff who are not only involved in value-added advanced manufacturing of medical treatments, including the prostate cancer therapy Zoladex, but also packing, logistics and the development of new medical treatments. The site also makes a major contribution to AstraZeneca’s and the UK’s export performance.

After the Prime Minister’s visit, David said, “I have worked with AstraZeneca over many years to assist the company in achieving its ambitions for its Macclesfield site and developed a strong working relationship with the company’s local and national leadership teams. I am delighted that the Prime Minister was able to see the major investment that is being made by AstraZeneca in Macclesfield and discuss the importance of the campus with Pascal Soriot.

Locally, we are all very proud of the many people that work at the site and for the contribution that they make to improving the lives of millions of patients around the world. The campus is the jewel in the crown of our local economy and plays a vital role in the Cheshire Science Corridor. I am very grateful to the Prime Minister for recognising the team’s important work and this major investment during his visit today.”

We are all very grateful for the fantastic work of local medical teams in rolling out the coronavirus vaccine in our area.