Prestbury Station Improvements Are In Train 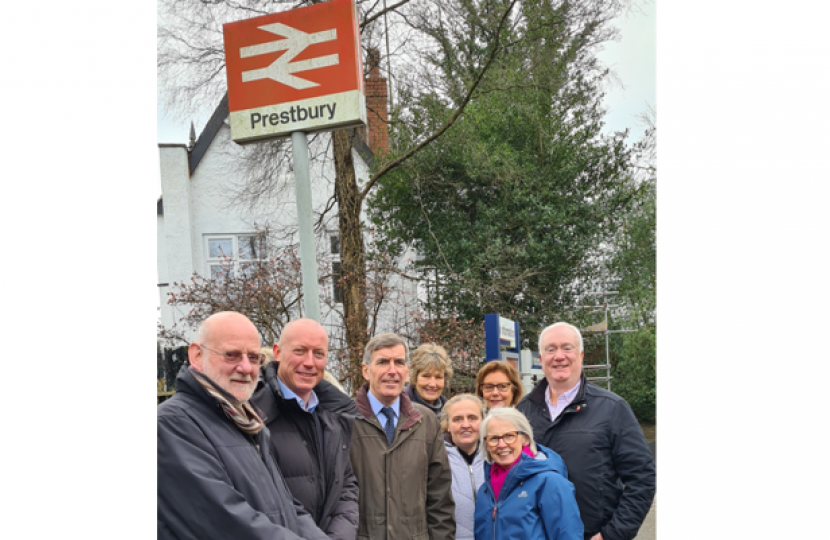 Improving facilities for passengers at Prestbury station remains a key priority for David Rutley MP, who met recently with Chris Jackson, Regional Director for Northern, and Becky Styles, Northern Community & Sustainability Manager, as well as with members of Prestbury Parish Council to review progress on delivering much-needed enhancements, and what more needs be done in the months ahead.

At the meeting, David was pleased to see for himself the positive progress being made to address the important concerns he and Prestbury Parish councillors had raised with Northern last Autumn. The windows in the waiting rooms have now been reglazed and the walls, lamp posts and seating have been repainted. A community defibrillator has also been installed.

Mr Jackson confirmed that further work is already planned to replace the platform fencing, which is due for renewal. Meanwhile, the information screens on both platforms will be relocated shortly to make them more visible and passenger friendly, and the potholes in the station car park and access road will be repaired in the near future.

Other important concerns for the community are the pressing need for CCTV, to deter the anti-social behaviour that has caused many of the recent issues at the station, and options to improve accessibility for disabled people. Mr Jackson confirmed Northern will be reviewing both the scope to have cameras installed, as well as the potential for Access for All funding from the Department for Transport to address the well-founded access concerns.

To maintain the momentum in realising these essential improvements, Northern and Prestbury Parish Council are jointly establishing a Friends of Prestbury Station group, which will work to look after the station and campaign for improvements. David was pleased that Northern has already provided a dedicated room, complete with water supply, at the station for the group’s use, when it is fully formed. Any local residents interested in joining the group should contact m.leather@prestbury.gov.uk, d.murphy@prestbury.gov.uk or clerk@prestbury.gov.uk

Speaking after the meeting, David said, “Passengers at Prestbury have long-deserved a more welcoming station environment, so I am pleased that these much-needed improvements are now being realised following the active campaigning by Prestbury Parish Councillors. We need to build on this good progress, and that’s why I actively support the formation of a Friends of Prestbury Station group, to keep up the momentum. I hope local residents will consider joining this worthwhile initiative in the near future.”