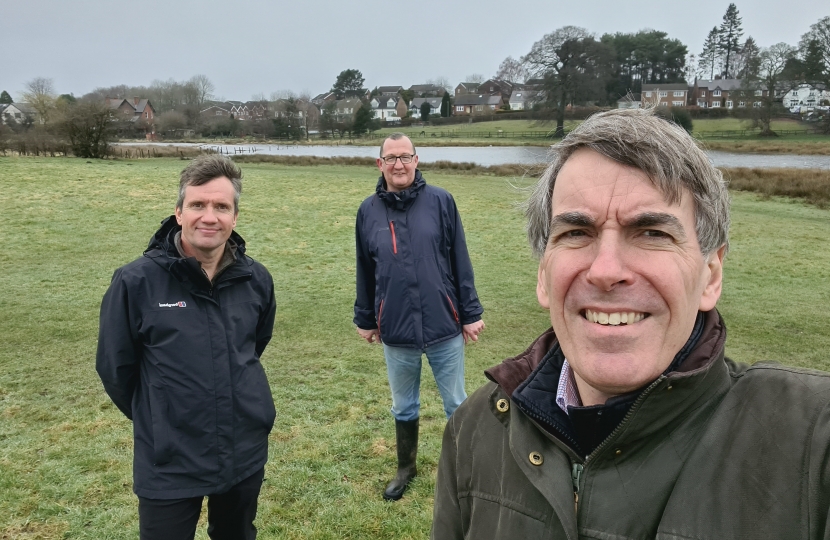 Having had longstanding concerns about planned developments on Chelford Road, Macclesfield, local MP, David Rutley, has joined local campaigners in expressing strong concerns about latest plans that would see the loss of large quantities of peat from the sites.

On a recent visit to the site, Henbury Parish Councillors, Dr Simon Browne and Richard Slater explained to David how the developers now propose the extraction of around 24,000 cubic metres of peat, with an amount to be reused on the site and the remainder – currently estimated as 5,500 cubic metres - to be removed. This is despite Cheshire East Council’s Strategic Planning Board being assured in January, that no peat was to be removed from the site.

The area planned for development north of Chelford Road lies on the old Longmoss peat bog. Geo-assessments have shown depths of peat up to 5 metres in parts, although the full depths were not measured by the developers prior to making their planning applications. Plans for both development sites in this area are to be heard at the Strategic Planning Board on Wednesday 24th March.

Removing large quantities of peat has major impacts at a time when tackling climate change is a clear priority. All peat, once removed, will decompose and release the locked-up carbon. The Henbury Parish Councillors highlighted that the International Union for Conservation of Nature (IUCN) estimate that land with a depth of 30-50cm of peat, as is the case with the local sites, stores an amount of carbon equivalent to that in an identical area of tropical rainforest. There would also be a knock-on impact on neighbouring land and subsequent CO2 release from the drying out of the peat caused by water level change and interruption to the peat seams.

The developers, despite being asked by the previous Cheshire East Council Strategic Planning Board, have not yet produced a hydrogeology report nor a detailed peat management plan, to explain the impact of plans and how they will be managed. As a result, it is not clear how the site drainage will be affected, as peat is an effective ‘sponge’ and surface water run-off will now be almost instantaneous, affecting land downstream, including the Cock Wood ancient woodland local wildlife site.

After visiting the site, David said, “Peatland is increasingly recognised as an important aspect in the fight against climate change, being a valuable source of carbon storage. Protecting this vital resource is a real priority and this needs to be properly reflected in the plans for the planned developments on Chelford Road. A peat management plan needs to be produced and every effort made to protect this valuable, local source of carbon storage.”