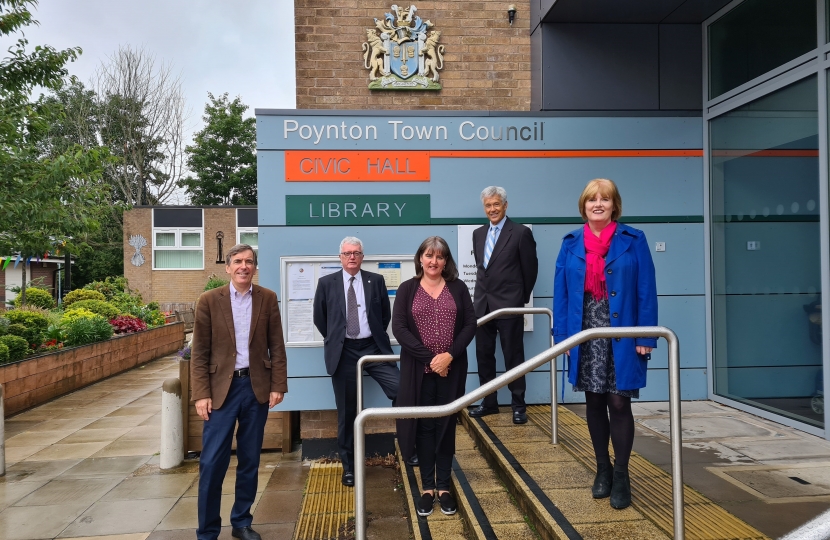 Having actively campaigned for many years for the Poynton Relief Road, local MP, David Rutley, and local Poynton Councillors have strongly welcomed the news that work will start on this much-needed infrastructure project in the autumn.

David has campaigned and actively worked with local councillors, residents and community groups in Poynton over the past ten years to help push plans forward and make this vital scheme a reality. During this time, David has also been in regular contact with Ministers at the Department for Transport to get their support and financial backing for the project. Government funding for the £53 million scheme was agreed earlier in the year.

Following the recent announcement by Cllr Craig Browne, deputy leader of Cheshire East Council, early enabling works will commence this autumn and the expectation is that the road will be open to traffic in autumn 2022.

This Relief Road will improve the highway network for walking, cycling and public transport. It also seeks to relieve heavy congestion and divert traffic away from Poynton’s busy roads, particularly heavier goods vehicles, and onto key strategic routes. The Relief Road will also improve air quality and play a vital role in economic development plans for both Poynton and Macclesfield.

At approximately 3 kilometres in length, the northern end of the relief road will connect to a junction with the A6 Manchester Airport Relief Road, before passing under the A5149 Chester Road to the west of Poynton and continuing to cross the old site of the Woodford Aerodrome runway. At its southern end, the route will pass to the west of Adlington Business Park before connecting to a new roundabout junction to the west of the Adlington Travel Lodge. The Relief Road will also include two overbridge crossings for use by walkers, cyclists and farm vehicles and a 3.5 metre-wide combined cycle and footway which will run beside the length of the route on the western side.

Following the announcement, David said “This is very positive news for the people of Poynton, as the long-awaited Relief Road will help to significantly tackle traffic congestion and enhance air quality in the village. I will continue to work closely with Cheshire East Council to ensure that this vital infrastructure project is delivered in line with project plans to improve the lives of local residents and support economic development plans, as soon as possible.”