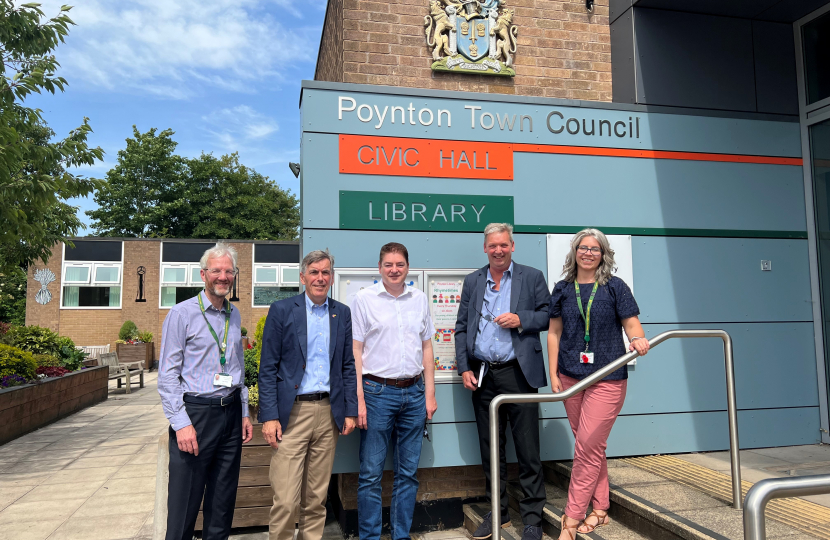 Plans to take forward flood prevention in Poynton was the main topic discussed at a recent meeting with the Deputy Leader, Cllr Craig Browne, and senior officers of Cheshire East Council and Macclesfield’s MP, David Rutley. David was pleased to hear that following the serious flooding incidents in 2016 and 2019, formal flood investigations had been published and a more detailed multi-agency action plan has been established, which is being regularly reviewed and updated.

Poynton Town Council, United Utilities, the Environment Agency together with Cheshire East Council, have been working as a multi-agency team to take action since 2016 to mitigate local flood risk, based on recommendations from the 2016 and 2019 Section 19 Formal Flood Investigations.  The most recent action plan can be found following this link, https://www.cheshireeast.gov.uk/planning/flooding/floods-and-flood-risk/flood-investigations.aspx

A number of natural flood management interventions such as leaky dams and bunds have been put in place in key locations which David has previously visited, playing an important role in storing flood water upstream, to slow the flow. In addition, drainage improvements have been completed and culverts and ordinary watercourses have been cleared in several locations.

Poynton Town Council has also organised training for a new team of volunteer Flood Wardens. Flood Wardens act as the community’s eyes and ears on the ground, who are able to report problems, support residents with advice and information and raise awareness about flooding in general. The Flood Wardens will also support and work with the Town Council on flooding issues by getting involved with flood prevention initiatives and liaising with flood authorities.

Cheshire East Council passed a resolution to establish a task and finish group to undertake an in-depth review of flooding and flood risk management. This has enabled further multi-agency engagement to scrutinise the impacts of flooding in various areas of Cheshire East, including Poynton. The report and its finding are expected to be presented to the Highways and Infrastructure committee in the months ahead.

Speaking after the meeting, David said “I have long been calling for a thorough action plan to be put into place and it is now good to see this has been made available for the public to review. It is good to see partnership working leading to several initiatives being set up across Poynton to help mitigate further flooding and I welcome the strong community response. It is important this plan is regularly reviewed and updated to ensure the community is better prepared to prevent floods over the years ahead.”