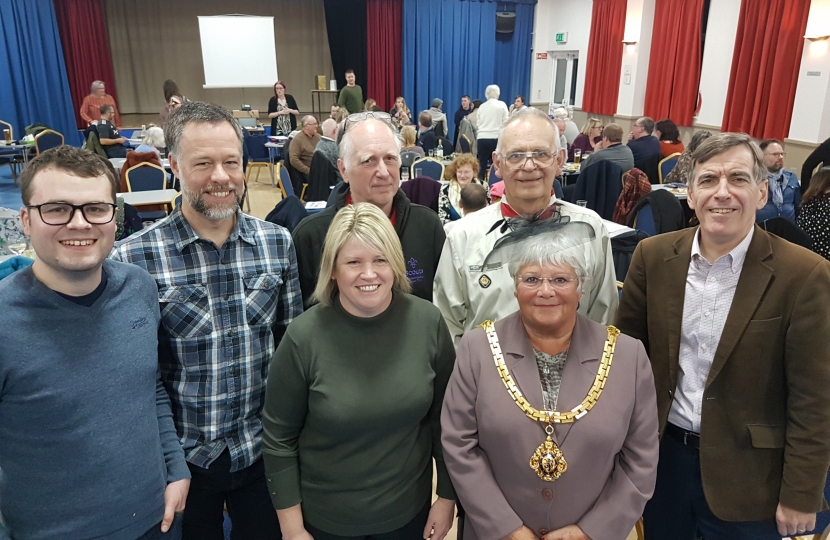 Once again raising funds towards the building of a new scout hut in Macclesfield, the well-attended event saw over 100 scout leaders, their family, friends and other supporters get together in aid of this important cause. Now in its 13th year, the quiz, held as ever at Mottram St Andrew village hall, raised an impressive £1,003, and the winning team were rewarded with a case of wine. The Mayor of Macclesfield, Cllr Janet Jackson MBE, also attended.

At the event, David spoke with Richard Hodges, 3rd Upton Priory Scout Group Leader, who explained that the troop hopes to begin work on the new scout hut in the summer. This will enable the troop to more effectively carry out its work supporting the scouts, beavers and cubs who are members.

As well as the quiz, the evening saw three of the troop's adult leaders receive Wood Badges from the Cheshire Scouts District Commissioner, Mark Eden. The Wood Badge is a Scouting leadership programme and the related award for adult leaders in the programmes of Scout associations across the world. Wood Badge courses aim to make Scouters better leaders by teaching advanced leadership skills, and by creating a bond and commitment to the Scout movement. David congratulated the scout leaders, as well as those who received long-service awards, on their impressive achievement and wished them well in their duties going forward.

Speaking after the event, David said, "It is always a pleasure to join 3rd Upton Priory Scouts for their annual quiz night. As well as being a fun evening, it's an important fundraising opportunity to help this much-valued local organisation continue its positive work in our local communities. I am grateful to all those who supported the event, as well as the organisers for taking the time to arrange the quiz. It is also good to hear that the plans for the new scout hall are well underway, and I look forward to seeing more progress in the year ahead."