Order In The House For Puss Bank School Visit 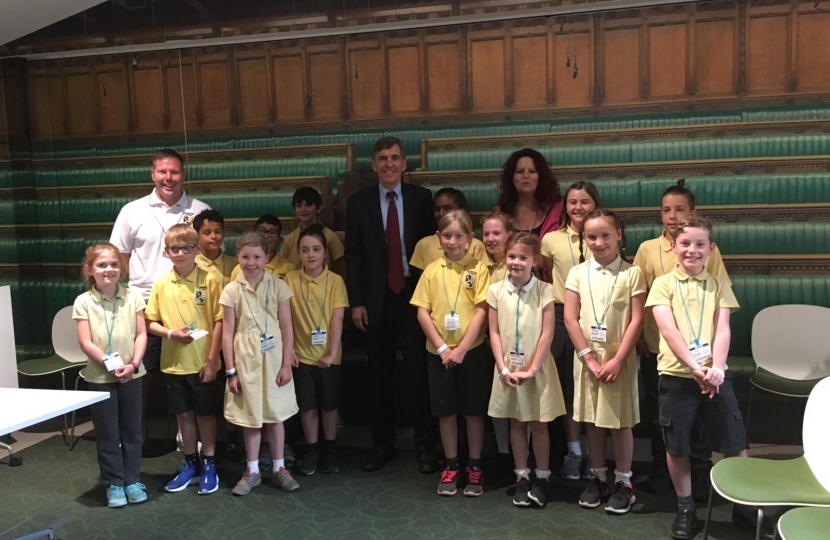 Pupils from Puss Bank School visited the Houses of Parliament recently, and met with local MP, David Rutley, for a special question-and-answer session.

David joined the pupils, from the school's Years 4, 5 and 6, in the purpose-built Parliament Education Centre's Commons Space. There, David spoke about his work standing up for Macclesfield in Parliament and locally, highlighting his active support for initiatives to regenerate Macclesfield town centre. He also spoke about the important new measures he is taking through Parliament as a Minister at the Department for the Environment, Food and Rural Affairs (Defra) to improve animal welfare. The pupils then asked David a range of questions on our democratic institutions and current affairs.

Ahead of their meeting with David, the pupils had taken part in fun and informative workshops to build their knowledge and understanding of how Parliament works, and the process by which laws are made. They had also enjoyed a full guided tour of the historic Palace of Westminster, led by an official House of Commons tour guide.

David is always pleased to meet with local school groups in Parliament. Any local school interested in visiting the Palace of Westminster can find more details at: www.parliament.uk/visiting

Speaking after the visit, David said, "The Puss Bank School pupils clearly had a busy and enjoyable day in Parliament and had learned a lot about our democratic institutions and how they work. I was impressed by the well thought-through and articulate questions they asked me and by their enthusiasm for these important issues. I look forward to meeting more school groups from Macclesfield in Parliament in the future."