Order In The House For All Hallows Parliament Visit 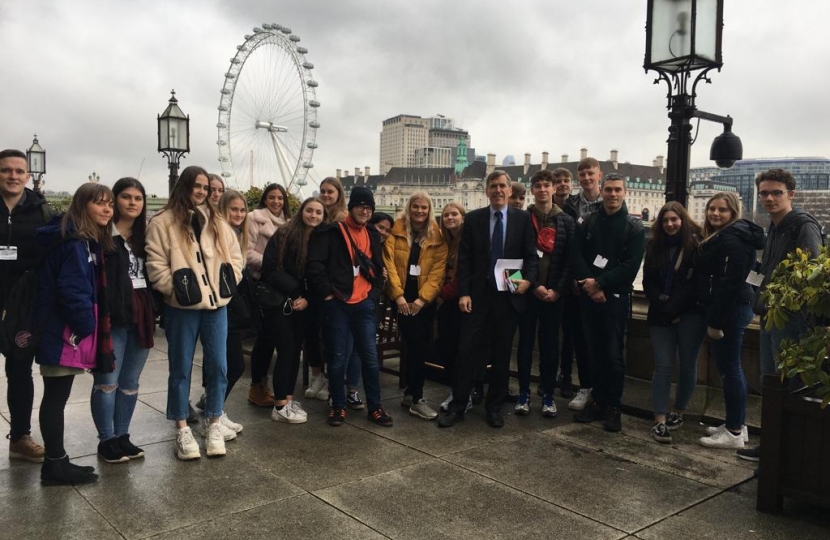 Year 13 students from Macclesfield's All Hallows Catholic College had the opportunity to visit Parliament at a unique time, as MPs returned to the House following the recent General Election. On their visit, they met with local MP, David Rutley, for a question-and-answer session.

On their visit, the group of over twenty young people were able to observe the many preparations underway for the State Opening of Parliament on Wednesday 18th December, as well as the excitement of MPs old and new coming to the House to swearing the Oath and take their seats. David took the students on an unofficial tour of the Palace of Westminster, giving them insights into the comings and goings of Parliament at this special time.

Prior to this, David joined the group in the Palace of Westminster's historic Westminster Hall, where he spoke with them about his work representing Macclesfield in Parliament and locally. The young people then asked David about a number of current issues, with questions ranging from the outcome of the recent General Election to the UK's withdrawal from the EU, as well as more local matters, such as the ongoing initiatives to support the regeneration of Macclesfield town centre.

David regularly highlights to schools in and around Macclesfield the opportunities available to them to arrange visits for their students to the Houses of Parliament and make use of the well-established and informative educational facilities available. Local schools can find further information on organising visits to the Palace of Westminster at: www.parliament.uk/education/visit-parliament-with-your-school/

Speaking after his visit, David said, "This was a particularly exciting time to welcome the All Hallows students to Parliament, with the House gearing back up following the General Election. It was clear that the young people were interested and engaged with our democratic processes and I was pleased to answer their thoughtful questions. I hope that they enjoyed their visit and I look forward to welcoming more local school groups to Parliament in the coming year."