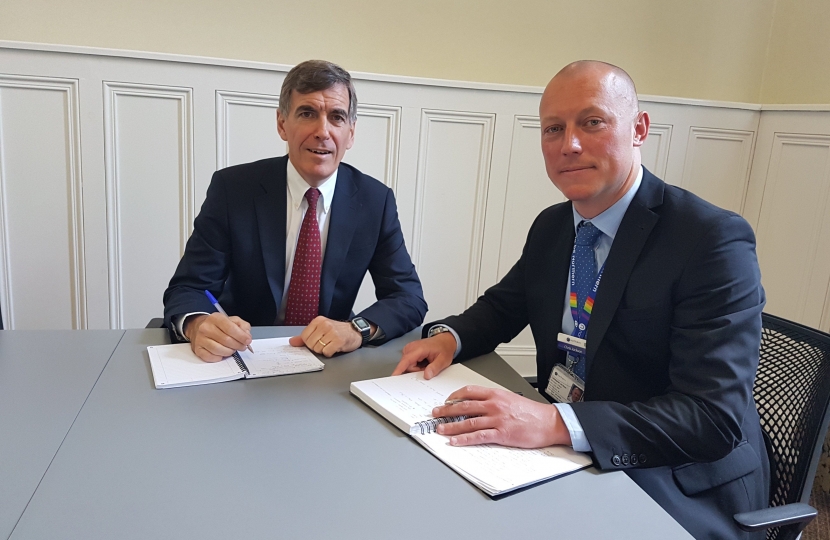 David highlighted the unacceptable delays and inconvenience that many local commuters and travellers have experienced, following the introduction of the new timetable in May last year. Mr Jackson apologised for the issues that affected passengers and informed David that there is now greater strategic oversight of operational delivery, to ensure that the planned timetable changes later this month are made smoothly.

David and Mr Jackson also discussed improvements to services. David was pleased to learn that, following consultation with local passengers, Northern Railway has submitted a timetable bid to Network Railway to reinstate the 6.00 a.m. service from Macclesfield to Stoke-on-Trent, which would also call at Congleton and Kidsgrove, enabling commuters to catch the earlier connections to London and the South. If approved, this additional service would be introduced from December.

Investment is also taking place in improving the company’s rolling stock. All of the 243 trains that will remain in service for Northern Railway beyond 1st January 2020 are planned to be refurbished. Currently, 53 per cent of stock has been refurbished, with the rest on track for completion. These works will provide new seats, customer information screens and, in time, Wi-Fi and USB sockets. They will also be fully accessible to customers with Reduced Mobility, including featuring universal access toilets.

David has also been pressing for continued investment in local train stations and was pleased to learn that steps are being taken to deliver this. For example, at Prestbury station, there are two refurbished waiting rooms, two customer information screens, and also long term plans for renewal of the footbridge at the station, with better access arrangements. At Adlington station, there is now CCTV, and a ticket vending machine canopy is in place, with another recently installed at Poynton. Additionally, Disley has received repairs to the dry stone wall in the carpark, and Northern Railway continues to work with the Friends group at Disley to help deliver improvements to the station area from Northern Railway’s Station Adoption Fund.

Speaking after the meeting, David said, "I am grateful to Mr Jackson for providing an update on these important issues for passengers in our communities. Local residents experienced significant disruption last year and it is essential that lessons are learned from this, and so I am pleased to have received assurances that plans are in place to ensure that timetable changes this month will go ahead smoothly. I will continue to press Northern Railway for additional investment in local services and stations going forward."