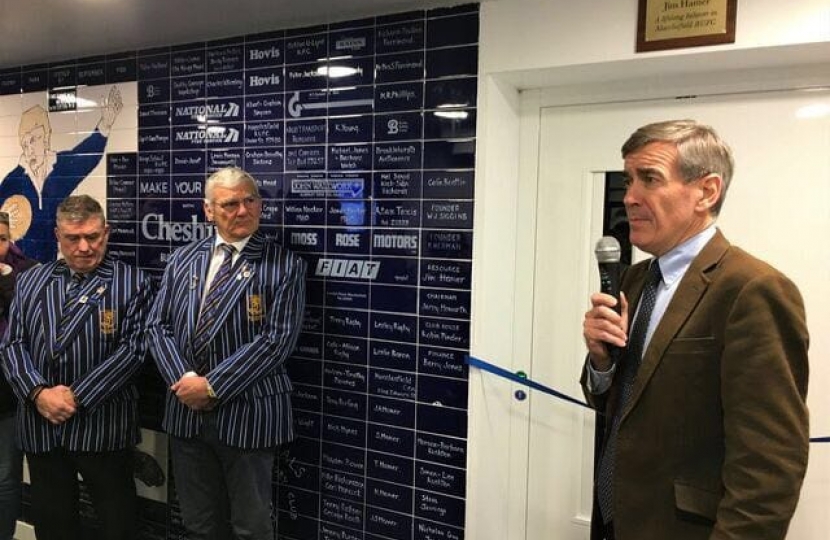 Macclesfield Rugby Club's ongoing refurbishment went up another level recently, with the official opening of its new lift, and local MP, David Rutley, was invited to join the club’s players, staff and supporters, for this special occasion.

At the well-attended ceremony, the lift was formally blessed by the Rt Revd William Alaha Pwaisiho OBE, Honorary Assistant Bishop of Chester, and Rector of Gawsworth and North Rode, before the lift’s first passengers made the inaugural ascent to the club's upstairs areas. The lift will now provide full access for disabled patrons to all public-facing parts of Priory Park.

On his visit, David spoke with Macclesfield Rugby Club Chairman, Stephen Branch, who explained that the lift was specially-designed and manufactured to be accommodated within the available space at the club, at a cost of £20,000. The funds were raised in the main thanks to a generous legacy from former club member, Jim Hamer. Mr Hamer’s family were present at the ceremony, with widespread thanks given for his generosity. The remaining funds were kindly provided by club members and supporters.

The lift is just one part of the ambitious plans that the club has to refurbish its premises. Other works completed include the opening last year of the new Spiral Lounge, which, along with the Priory Suite, can be hired out for functions and events, as well as upgrading all the club's beer pumps, lines and installing a new cellar. David heard from Mr Branch that there is still plenty more to be done, with further work needed to refurbish the changing rooms and showers, including for the club's new ladies team, as well as extending the kitchen area; installing floodlights for the club’s second pitch; refurbishing Priory Park’s astro pitch; bringing the land to the rear of the main pitch into use for the wider community; and extending the clubhouse.

All donations, including in the form of sponsorship from local businesses, are welcome, and there are more details on how to do this by emailing andy@maccrugby.co.uk

Speaking after the event, David said, "The installation of the new lift is another significant milestone in the club's refurbishment journey. I am grateful to all those, particularly Jim Hamer’s family, who gave their time and money to help make this important project a reality and enhance accessibility at the club for all fans. I hope the lift gives many years of improved access and look forward to seeing continued positive progress with the club's refurbishment going forward."