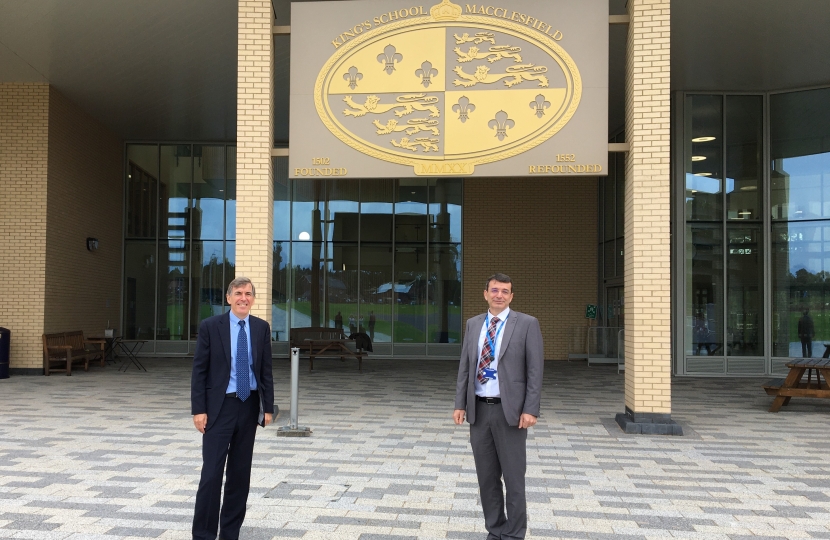 This was David’s first visit to the new purpose-built 80 acre site since it was opened in September. During the visit, Mr Slack gave David an overview of the school’s facilities and an update on the positive progress that has been achieved over recent weeks, despite having to deal with challenges relating to coronavirus.

After the meeting, David was shown several of the school’s new facilities, while respecting the school’s social distancing restrictions. David was impressed by the main academic building which now houses all year groups, both boys and girls, and the new separate sports centre, which includes a gym, dance studio and a swimming pool, and wider sports facilities.

Mr Slack explained how, since it’s foundation more than 500 years ago, King’s has been active in servicing the wider community in Macclesfield. He remains committed to building on this long history of providing community access to its facilities and forming strong links with community sports groups.

The school is looking forward to further expanding the number of community users, so that more young people can benefit from its facilities, when the current coronavirus restrictions are eased.

Mr Slack is proud to be Head of Foundation at such an important time in the school’s long history. He brings a wealth of experience to King’s, having previously been Head Teacher at King Henry VIII School in Coventry for ten years. Mr Slack is a physics teacher by background and is a skilled musician, playing the violin.

Speaking after his visit, David said “I was grateful for the chance to meet Mr Slack and to see the school’s new, impressive campus in active use. King’s has a long history in Macclesfield and I was pleased that community partners are already able to benefit from using the new facilities that are now available. I wish the school continued success in its new home in the years and decades ahead”.

The new Kickstart scheme has been designed to help more young people get into the world of work. It has a vital role to play in creating jobs in these uncertain times. I have been actively working with our local Job Centre Plus team and local businesses to help promote the scheme.