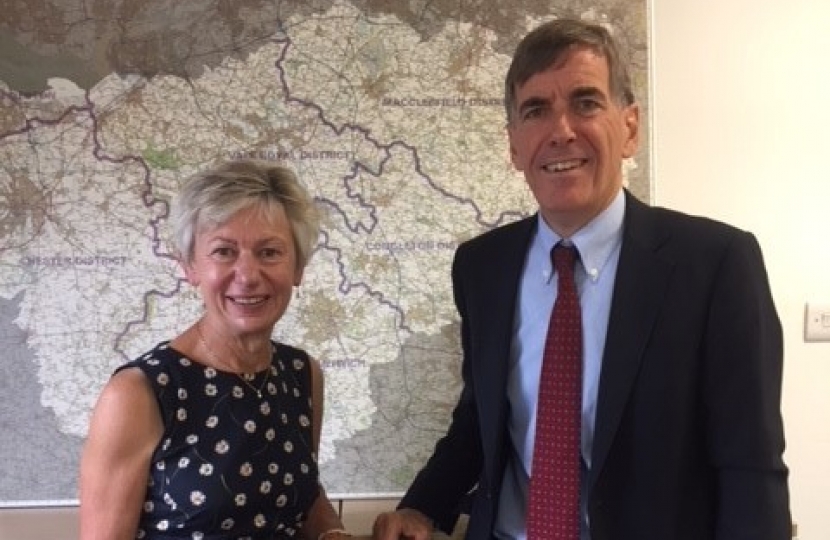 Cllr Bailey and Ms O’Dwyer outlined that Cheshire East Council continues take forward vital work to develop a clear vision for the town centre to inform the SRF, which will help to guide and co-ordinate ongoing regeneration initiatives. The consultation will seek opinions on new options and approaches for ‘character areas’ within the town centre that will, among other priorities, seek to highlight the town’s rich heritage. Cllr Ainsley Arnold, Cabinet Member for Housing, Planning and Regeneration, confirmed in a meeting with David that this work will complement the ongoing investment in the public realm, which has been allocated an additional £5 million, beyond the £1.4 million already set aside to redevelop Castle Street.

The Council will launch in a full public consultation on the proposals in the SRF which is due to start in February, and will run for four weeks, into March, during which time local residents, businesses and community groups will be able to have their say. A final framework is then expected to be reviewed and adopted by Cheshire East Council in June. David has given his continued backing to this important work, which will help to realise the enhancements to the town centre that local residents want and need.

David was also pleased to learn that Cushman & Wakefield, the real estate consultancy firm, has been engaged by Cheshire East Council to support the work on the SRF, in ensuring the views of local stakeholders are considered. This input will continue to be vital in taking the regeneration plans forward. David, Cllr Bailey and Ms O’Dwyer also discussed the recent £11 million investment in expanding the Grosvenor Centre, and the plans for a new food market in the former Picturedrome building on Chestergate, which will help make Macclesfield a more distinctive destination.

Speaking after his meeting, David said, "Regenerating Macclesfield town centre continues to be a major priority for me and many local residents, and I welcome a clear focus on this vital issue for our community by Cheshire East Council. I am pleased that the consultation on the Strategic Regeneration Framework is due to begin in the near future, and I encourage local residents and businesses to fully engage with this process and have their say. 2019 will be an important year for the regeneration of Macclesfield town centre, and I will continue to do all that I can to support these important initiatives going forward.”

Having secured £5 million from Cheshire East Council to improve public spaces, I am pressing for plans to now be rolled out with local businesses and community groups to improve the town centre.