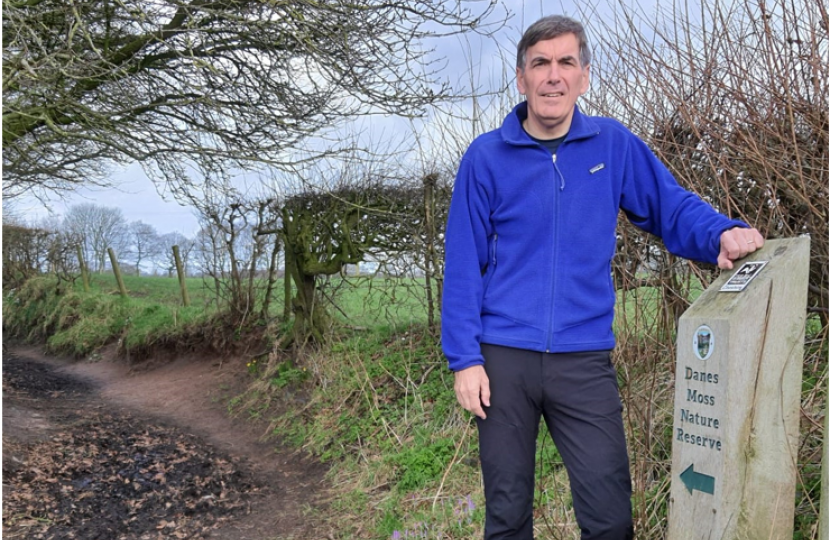 Macclesfield MP, David Rutley, has joined local campaigners in expressing strong concerns about the impact latest development plans would have on the extensive peatland at Danes Moss.

Many constituents have written to David setting out their major concerns, many of which he shares, about the planned development relating to the significant loss of biodiversity and concerns about the impact on much-valued peatland. As we are more increasingly aware, peat plays a vital role in the fight against climate change – being a valuable source of carbon storage.

David recognises that the Danes Moss site was allocated in the Local Plan Strategy in 2017 and that outline planning permission was granted in 2019. However, before any further steps are taken with this development, he believes it is vital that an Environmental Impact Assessment of the reserved matters is completed by Cheshire East Council (with particular focus on the link road which would extend across some of the deepest areas of peat) and that a hydrology study takes place to determine how the development would impact the neighbouring Danes Moss SSSI. Furthermore, it would also be important for the Council to complete an entomology report to more fully understand the ecological impact on insects at the site.

David feels that it is essential to set out how development plans for the site fit with the England Peat Action Plan. Taking these steps will then enable Cheshire East Council to review and reconsider the development in light of the most up to date and relevant information.

David raised these points and constituents’ concerns at a recent meeting with Cheshire East Council officers about the South Macclesfield Development Area, and urged the Council to take forward these actions as a clear priority, given how environmentally sensitive the site is. David has also written to Dr Lorraine O’Donnell, Chief Executive of Cheshire East Council, on behalf of constituents to ensure that their views are fully considered.

Speaking after the meeting with Cheshire East Council, David said, “Peatland remains a significant contributor to reducing carbon emissions, as well as having other benefits for water quality, nature and flood mitigation. As set out in the England Peat Action Plan, peat is a valuable tool in tackling climate change. That is why I am calling on Cheshire East Council to review and reconsider the planned development at Danes Moss - we need to do all we can to protect this important local store of carbon.”