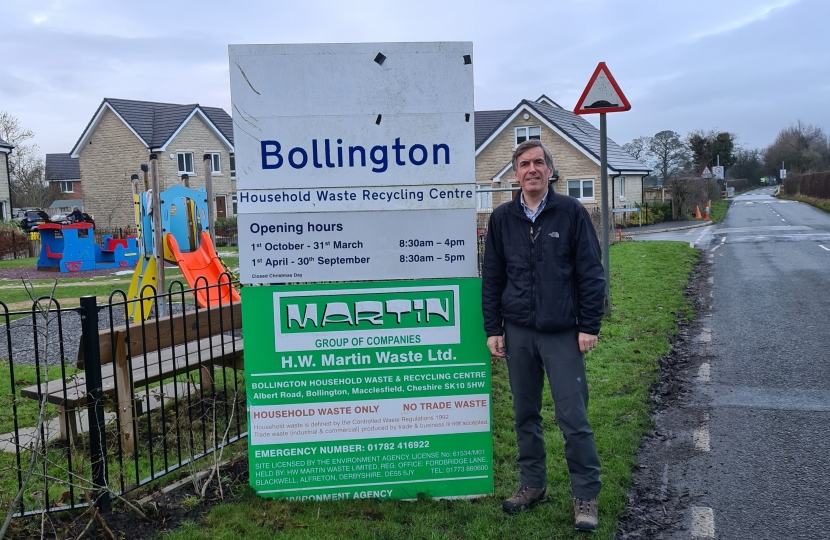 David Rutley, Macclesfield MP, is calling on Cheshire East Council to keep both Bollington and Poynton recycling centres open, as the Council is carrying out a Household Waste and Recycling Review.

David has written to Cheshire East Council in strong support of the submissions from Bollington Town Council, Poynton Town Council and concerned local residents to oppose proposals and options in the Household Waste and Recycling Review, which would lead to the closure of the Bollington or Poynton recycling centres.

Both recycling centres are very actively used not just by residents in Bollington and Poynton, but by many residents in neighbouring communities, including Adlington, Disley, Prestbury, Rainow, Pott Shrigley, Tytherington and Hurdsfield.

David has highlighted how as we seek to actively tackle climate change, it is vital to encourage and enable as many people as possible to recycle whenever possible. If Bollington or Poynton recycling centres were to close, there would be a significant increase in journeys to other recycling centres involving longer journey times and increased air pollution. In addition to this, there is also: an increased risk of illegal fly-tipping – particularly in nearby rural areas; the impact of more items potentially being placed in black bins that could have been recycled at a recycling centre; and the risk of garden or household waste being burned - with the associated impact on air quality.

These impacts do not fit with the wider aims of Cheshire East Council’s own Environmental Strategy and it would appear that a full environmental impact assessment has not been made of each of the options that have been set out in the review.

After forwarding his submissions to Cheshire East Council, David said, “I am giving my strong support to calls to keep both the Bollington and Poynton recycling centres open. I am urging Cheshire East Council to reject proposals in its review that would lead to closing either centre, as these options would not only inconvenience many local residence who actively use these recycling centres, but also lead to longer journey times, increased air pollution, increased fly tipping and a reduction in recycling. I hope that the Council will listen to these concerns, and those raised by many local residents and local councils, and keep the recycling centres open.”