MP Calls For Full And Thorough Investigation Into Recent Floods 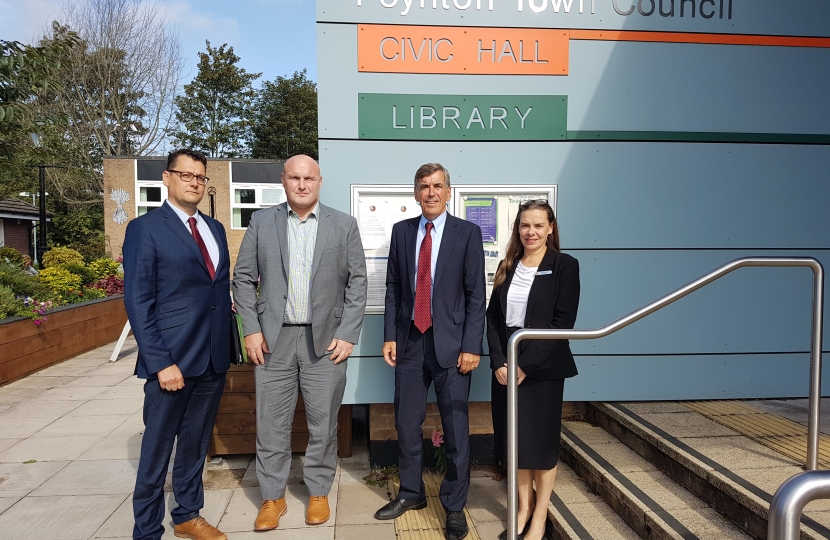 Action on improved flood resilience and prevention was at the top of the agenda at a meeting organised by local MP, David Rutley, with senior representatives from the Environment Agency and Cheshire East Council, to review the response to the recent flooding incidents in Poynton.

At the meeting, which was also attended by the Clerk of Poynton Town Council, Haf Barlow, David emphasised the widespread concerns of local residents in Poynton about the recent flooding, particularly coming so soon after the floods in 2016. David asked for a clear action plan to be taken forward and communicated to address the current flood damage and be more fully prepared for future incidents. He also called for a full and thorough investigation into the recent flooding incidents to be completed as a priority. David then asked for a progress update following the recent multi-agency public drop-in event for Poynton residents.

Lee Rawlinson, Environment Agency Area Director for Greater Manchester, Merseyside and Cheshire, explained to David that his team is currently working to assess the overall extent of the flooding in and around the Poynton area, gathering essential data that will be needed to inform future planning. He asked that anyone who has been affected by the flooding but who has not logged this should contact the Environment Agency’s incident hotline on 0800 80 70 60. Information about available support for affected households can be obtained by calling the Environment Agency on 0345 988 1188. David was also pleased to learn that a further public drop-in event is being planned for Bollington, as well as residents in Rainow and Kettleshulme.

In addition, Paul Bayley, Director of Environment and Neighbourhood Services at Cheshire East Council, said that the Council will be conducting a Section 19 Flood Investigation Report, which is a requirement of the Flood and Water Management Act 2010, to set out the causes and impact of the recent flooding, and to put forward a recommended plan of action.

Following the meeting, David then joined Mr Ian McClellan, Highways Contracts Manager at Cheshire East Council, and Ringway Jacobs representatives on a site visit for a progress update on work underway to clear drains and gullies in Poynton and review damage to local infrastructure. Mr McClellan gave assurances that there is an active programme of works underway, which also includes repairing infrastructure damaged by the flooding, including Wards End Bridge on Moggie Lane.

During and in the immediate aftermath of the flooding, David’s office was in hourly contact with Poynton Town Council, to establish its most pressing requirements, liaising closely with Cheshire East Council, to ensure these urgent actions were fulfilled. Throughout the following days and over the weekend, David was constantly in touch with a number of agencies involved in the flood response efforts, and he continues to be in close contact with local councillors, Poynton Town Council, the Environment Agency, and Cheshire East Council.

Speaking after the meeting, David said, "Coming so soon after flooding in 2016, these recent floods have caused significant concern for the community in Poynton and more widely. I worked closely with Poynton Town Council, Cheshire East Council, and the Environment Agency, in the immediate aftermath of the flooding, but residents need clear reassurance that they will be more fully protected from future instances of extreme heavy rainfall. That is why I have called for a full and thorough investigation into the recent floods, and for a clear action plan to be developed and communicated to local residents, as an urgent priority."