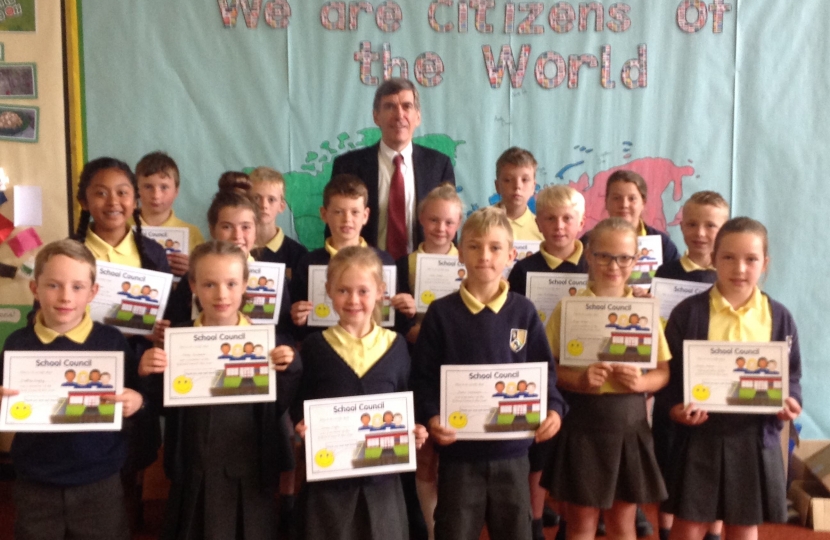 David Rutley, MP for Macclesfield, visited students at Puss Bank School recently, after they were unable to visit the Houses of Parliament, as planned, earlier in July.

The School Council from Puss Bank School were due to visit Parliament on 10th July for a tour, but were unable to make the trip to London. So, David was invited to visit them instead, and he joined them on the morning of Friday 14th July.

During his visit to the school, David was invited to speak to the whole school assembly, and was asked to present certificates to members of the School Council. David also held a meeting with School Council members and Year 6 students, where he told them more about his work as their local MP, and took questions on among other issues: his role in Parliament, school funding and the activities that are available for young people in Macclesfield town centre.

The pupils also took the opportunity to talk to David about their recent mock general election, which took place on 8th June. For their election, the students created their own political parties, elected their own party leaders and crafted high quality party manifestos for school pupils to review and decide who to vote for.

Following his visit, David said: “I was pleased to be able to bring Parliament to Puss Bank School on this occasion. I was grateful for the chance to visit them, so that I could tell them more about my work as their MP, and have the opportunity to answer their interesting questions. It was great to see how engaged they were with our democratic processes, and it was good to hear about their successful mock election. I hope to be able to welcome them, and other school groups to Parliament in the near future.”