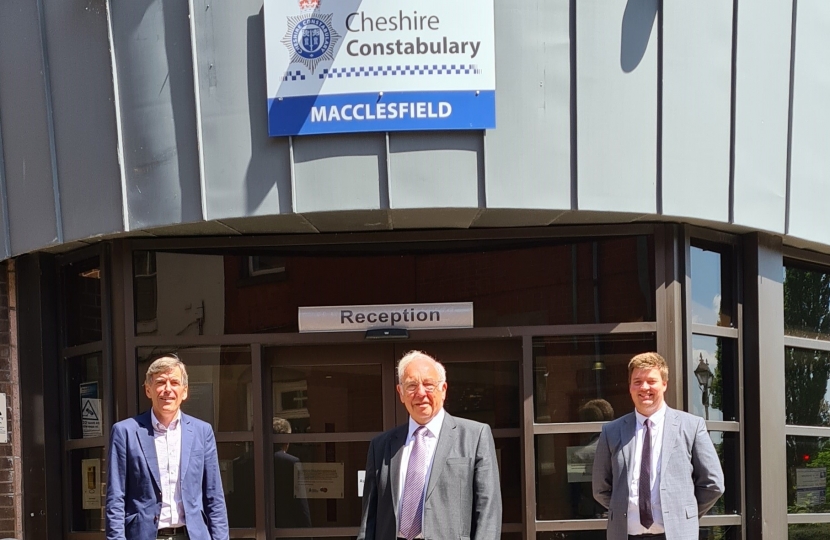 At the meeting, Mr Dwyer set out his ambitious plans to make Cheshire an even safer place during his term of office, over the next three years.  They include a commitment to increase police officer numbers in local communities and increase the number of crimes detected, as well as the PCC’s desire to see Cheshire Constabulary achieve ‘outstanding’ approval ratings from Her Majesty’s Inspectorate of Constabularies and Fire & Rescue Service. More details are set out in the Police and Crime Commissioner’s Police and Crime Plan for 2021-2024.

David was pleased to hear that Mr Dwyer and David McNeilage, the new Deputy PCC, who also attended the meeting, had already spent time working with the Rural Crime Team in the Macclesfield area. Rural crime is a real local concern and there is ongoing, positive work to tackle sheep stealing, theft of farm equipment and fly tipping.

County lines drug-related crimes and anti-social behaviour were also raised by David. Progress continues to be made in combatting organised crime and Cheshire police are working to break the business model of gangs based in Liverpool and Manchester that target young, often vulnerable, people in Macclesfield. David also raised concerns on behalf of some residents he met regarding recent anti-social behaviour involving young people in the Upton Priory area.

Steps to confront online abuse were also discussed – a subject that has had a higher profile following the shameful online racist abuse that several England football players received during Euro 2020. David and Mr Dwyer also highlighted the importance of scams awareness and praised the work of charities such as Age UK Cheshire East in raising awareness and supporting victims of fraud. The Government’s Online Safety Bill will play a vital role in addressing harmful content online.

After the meeting, David said, “I was pleased to have the chance to meet our new Police and Crime Commissioner, and his Deputy, to discuss his ambitious Police and Crime Plan and local policing priorities. There is more to do to tackle rural crime, online abuse and scams, and drug-related crimes. John’s determination to make progress on these issues and make Cheshire safer is clear and I look forward to continuing to work with him on these priorities in the months ahead.”

Cracking Down on Crime

Tackling "County Lines" and other drug related crimes is a vital task. I will continue to do all I can to help prevent young people from becoming victims of this destructive activity.