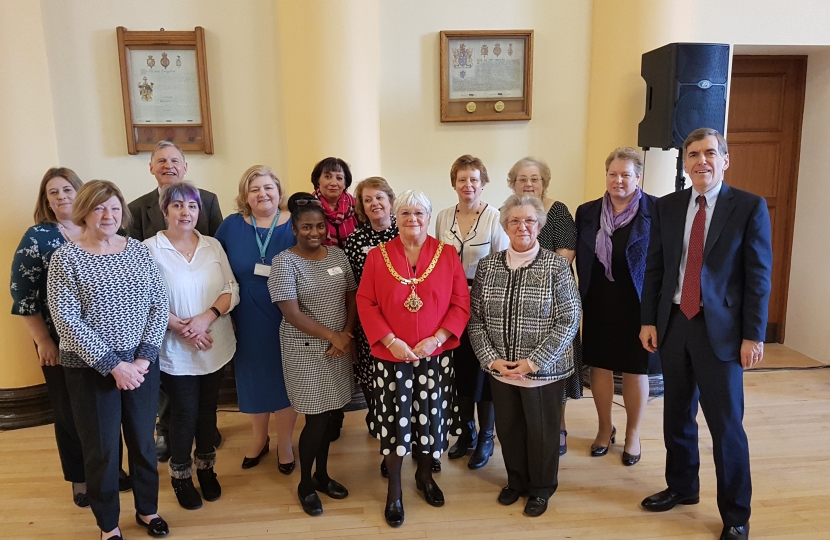 Local MP, David Rutley, gave his support to the 2020 Macclesfield Mayor’s Prayer Breakfast hosted by the Mayor of Macclesfield, Councillor Janet Jackson, at Macclesfield Town Hall and organised by HOPE in North East Cheshire on Friday 6th March. The event put the spotlight on supporting the elderly throughout our towns and villages.

This year’s Prayer Breakfast was in support of numerous local charities and focused on ‘Hopes and prayers for the challenges facing elderly people and those who support them.’ Representatives from MHA Live at Home, Age UK, Macclesfield Primary Care Network, Cheshire East Carer’s Hub, East Cheshire Hospice and Golden Memories spoke about their organisations and those they support, and led the prayers.  Also in attendance were senior executives from the Hospital, the Police and local firms, representatives of the schools and college, town and borough councillors, Church Leaders, and trustees and volunteers from organisations throughout the Macclesfield area.

During the presentations, a number of organisations, including Golden Memories, focused on the challenges faced by dementia sufferers and their carers, and the vital work that is being done to support them.

Now in its 15th year, the Mayor’s Prayer Breakfast is an important opportunity to thank the local organisations that make such a positive difference in the communities in and around Macclesfield. If anyone would like to get involved in HOPE or any of these initiatives, they are invited to contact Pip Mosscrop, the Co-ordinator, at pipmosscrop2@yahoo.co.uk.

HOPE in North East Cheshire brings together some thirty-nine churches of many denominations in Macclesfield, Bollington and the surrounding villages. HOPE organises joint gatherings, such as the Mayor’s Prayer Breakfast for worship and prayer, and encourages shared initiatives in mission and service.

Speaking after the Prayer Breakfast, David said ‘The Mayor’s Prayer Breakfast has become an important annual fixture in Macclesfield, and for good reason. This important event allows us to give well-deserved thanks to many local organisations for the inspirational work that they do. We are extremely fortunate to have so many different groups all working together to further strengthen our local communities. I am particularly grateful for all the work that is being done to support older people, especially in these uncertain times.’