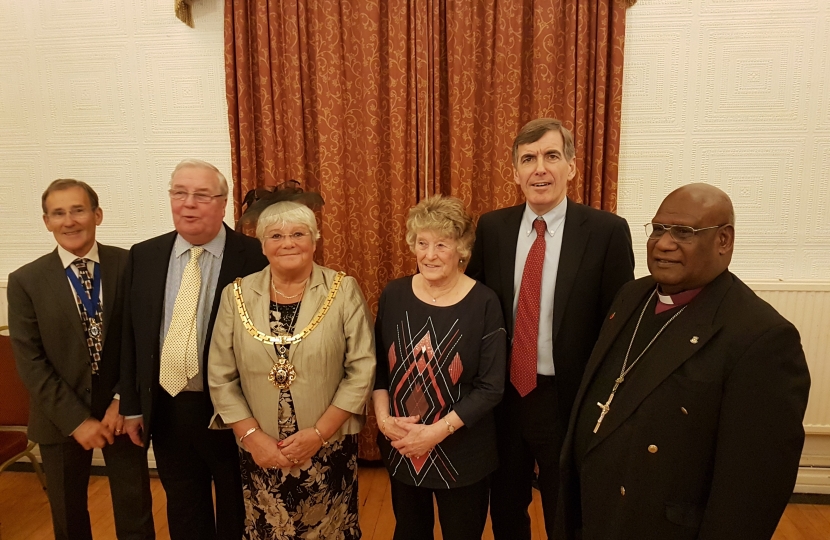 Macclesfield's much-loved Oriana Choir is celebrating its 90th season this year, with a commemorative dinner held in honour of this important milestone. Local MP, David Rutley, was pleased to join choir members and supporters, for this special occasion.

The dinner was very well-attended, with over sixty people present, including the Mayor of Macclesfield, Cllr Janet Jackson MBE. Special thanks were given to longstanding conductor, Keith Yearsley, MBE, who has recently celebrated sixty-two years as the choir's Conductor, and Andy Donaldson, the group's much-valued accompanist, who retired last year after fifty years of service, as well as the choir's fifteen life members. Mr Yearsley talked about the distinguished history of the choir, and many cherished experiences from their travels and his time on the podium. David took the opportunity to thank the choir for all that it does to promote and enhance cultural life in Macclesfield, and wished members every success in this special year.

Founded in 1930 by notable local organist, J.L Riley, the choir was originally known as the J.L. Riley Festival Choir. Among the group's early achievements was winning at the Festival of Britain in 1951. The choir changed its name at the request of the Riley family in 1966 to its present title. Today, the choir remains mixed-voice with four parts (Soprano, Alto, Tenor and Bass), averaging between 65-70 singers, performing mainly, but not exclusively, the great works of sacred music, from Bach through to Mozart, Vaughan Williams, Elgar, and John Rutter.

The choir always welcomes new members, particularly younger ones, who would like to see it continue to flourish, singing some of the world's greatest music. There are more details on how to join the choir on its website: www.macclesfieldorianachoir.btck.co.uk/Contact%20us

Macclesfield Oriana Choir will be holding a special celebratory anniversary concert on Saturday 8th February at Macclesfield Methodist Church. The programme will include music by Bach, Mozart, Faure, Elgar, and Rossini. Tickets are £12 in advance (by calling 01625 424 215) or £14 on the doors.

Speaking after the event, David said, "Macclesfield Oriana Choir has rightly become a much-loved and integral part of our town's cultural life. I was very pleased to join choir members and supporters for this special occasion and to celebrate this richly-deserved milestone with them. The enthusiasm and commitment of members is clear to see, and I hope many local residents will attend the anniversary concert this month. I wish all at the choir the very best in this special year."