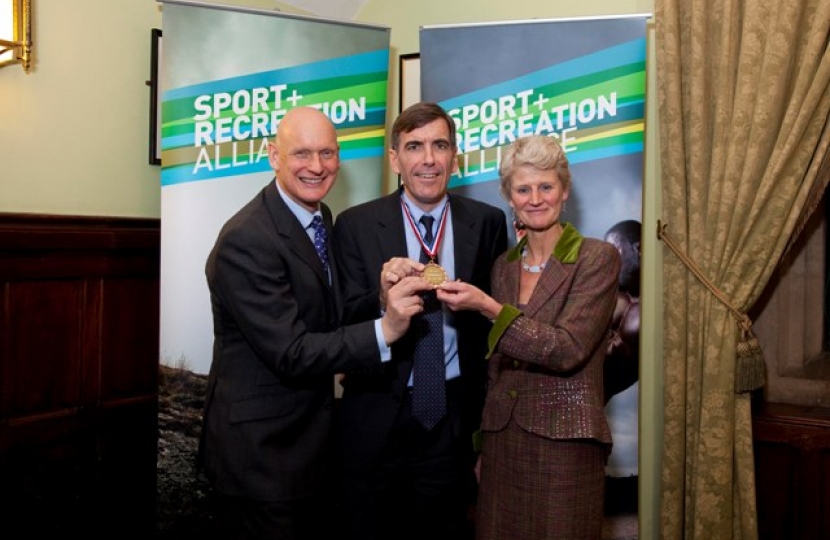 Macclesfield MP David Rutley, the MP for Macclesfield, has been named as a Sport and Recreation Alliance Sports Parliamentarian of the Year for 2012 for his work promoting the outdoors.

The award was established by the Alliance to recognise the efforts of those parliamentarians who have worked tirelessly with local people, clubs, organisations and governing bodies to promote and protect the interests of sport and recreation and get it higher up the government agenda.  David was awarded the bronze medal for finishing third out of eleven nominated MPs and peers at an awards ceremony in the House of Commons.
The Macclesfield MP was nominated by the British Mountaineering Council (BMC) in recognition of his work promoting climbing, hill walking and mountaineering.  As Co-Chair of the Mountaineering All Party Parliamentary Group, David actively works to highlight the benefits of these pursuits in terms of improving sport participation, enhancing health and well-being and supporting the rural economy.

David received his bronze medal at a celebratory dinner held at the House of Commons on 4th December by organisers the Sport and Recreation Alliance.  The award was made by a panel of five judges, including swimmer Duncan Goodhew MBE and sports broadcaster Jacqui Oatley.

Dave Turnbull, CEO of the BMC said, "David has been an exceptional advocate for climbing and mountaineering.  He has made a genuine and significant contribution.  His efforts have raised awareness of the benefits that mountain-related activities bring to the well-being of the nation and to local economies.”

The chair of the awarding panel, Brigid Simmonds OBE, said, “The panel was extremely impressed by David’s work to promote outdoor recreation.  We awarded David the bronze medal in recognition of his energetic efforts to champion the cause of climbers, walkers and mountaineers, which have clearly been highly appreciated by the outdoor pursuits sector.  David has been especially effective at engaging government ministers, and has even successfully encouraged his colleagues to put their walking boots on.”

Olympic gold medallist Duncan Goodhew MBE, who presented the award, said,  “Political support for the sport and recreation sector is essential to the delivery of a long-term legacy from London 2012, and I hope that committed and hardworking parliamentarians like David will be an inspiration to their colleagues.”

David said, “It is a real honour to have been awarded a bronze medal at the Sports Parliamentarian of the Year Awards.  I hope this competition will continue to raise the profile of climbing, hill walking and mountaineering, encouraging more people to take up the sports.  Through my work as Co-Chair of the All Party Parliamentary Group for Mountaineering and partnership with the BMC, I will continue to be an advocate for outdoor pursuits in the years ahead.”