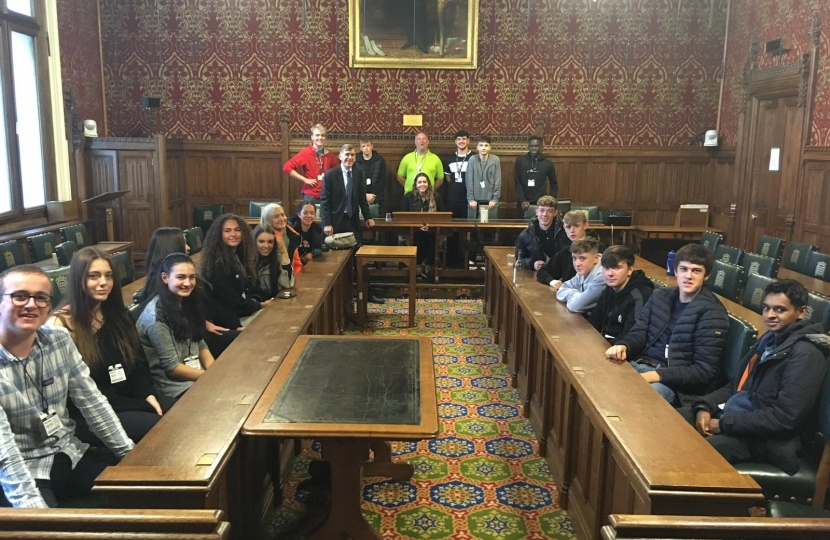 Business students from Macclesfield College who are taking part in a National Citizen Service (NCS) Urban Programme had their day in Parliament recently, when they met with local MP, David Rutley, for an engaging question-and-answer session on a visit to the Palace of Westminster.

David joined the young people in one of the Palace of Westminster’s historic Committee Rooms, where he spoke to them about his work as Macclesfield's Member of Parliament and his role representing our communities, both locally and in the House of Commons. The session focussed on David’s campaigning work to support the regeneration of Macclesfield town centre, which remains a clear priority for our communities. David updated the young people on important initiatives being taken forward to help deliver this, including the new Strategic Regeneration Framework for Macclesfield; further investment in the public realm; and the imminent opening of a new food hall in the Picturedrome building on Chestergate.

These issues were of clear interest to the young people, given their participation in the NCS Urban Programme, which has led them to look closely at urban regeneration schemes. Unlike traditional NCS courses, the activity section of which generally takes place in a rural location, the Urban Programme sees young participants taking part in a residential programme in a city - in this case, London. David wished all the students well in completing the course and commended them for taking part in this positive and worthwhile initiative, which had clearly helped to build their skills and confidence.

Whilst in Parliament, the young people also enjoyed a guided tour of the Palace of Westminster, and were able to take part in workshops to build their knowledge and understanding of our democratic institutions and processes. David highlighted what an important and momentous time this for our country, and how this should inspire younger people to take a close interest in our democratic processes and current affairs.

Speaking after the young people's visit, David said, "I was pleased to meet the National Citizen Service students from Macclesfield College in Parliament and to have the opportunity to answer their thoughtful and interesting questions. Their clear interest in the regeneration of our town centre was impressive. I hope they found their visit inspiring and informative and I look forward to welcoming other young people from local schools and colleges in the future."