Local MPs Call For Action On A6 Concerns 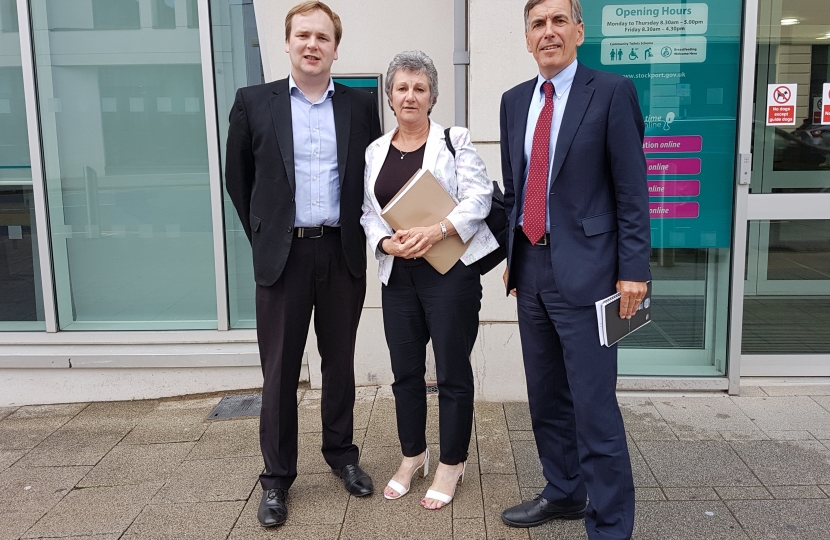 Alongside neighbouring MP for Hazel Grove, Will Wragg, local MP, David Rutley, jointly organised a special meeting with senior officials at Cheshire East Council and Stockport Metropolitan Borough Council, to call for action for communities along the A6 corridor affected by increased traffic congestion following the opening of the A555 Manchester Airport Relief Road.

At the meeting, which was attended by Caroline Simpson, Corporate Director for Place at Stockport Council and Chris Hindle, Head of Infrastructure at Cheshire East Council, David and Will raised the continued issues residents in villages such as Disley in Cheshire East and High Lane in Stockport are experiencing, with significantly higher levels of traffic on the A6 and on local roads than before the opening of the A555. They emphasised their strong concerns about the impact of increased vehicle movements on air quality, which, as David highlighted, is already a challenge and concern in Disley, which is an Air Quality Management Area. They also raised the need to review traffic light sequencing at Windlehurst Road Junction, to improve traffic flows.

The officials from Stockport and Cheshire East gave assurances that traffic count data will be gathered in the autumn, one year after the opening of the A555. Additionally, they explained air quality data for Disley is being tracked regularly and is available on the Cheshire East Council website. Whilst the officials advised that it is too early to draw definitive conclusions on the air quality data, analysis of this data and traffic count information will be made available as part of the full review of the new road scheme, one year after its opening.

Speaking after the meeting, David said, "Local residents in Disley and those living in communities along the A6 corridor continue to experience high traffic volumes and heightened concerns about air quality. It is vital that further steps are taken as a priority to address these serious challenges. I will go on working with Cheshire East Council and Stockport Metropolitan Borough Council, and Will Wragg MP, to address these important local issues."