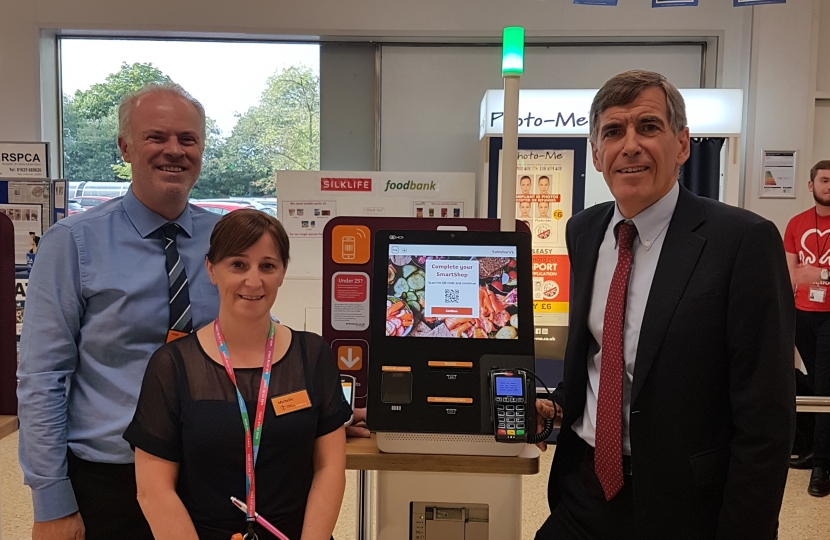 As part of the 150th anniversary since the opening of the first Sainsbury’s shop, local MP, David Rutley, visited the Macclesfield branch, to thank colleagues there for their support for the community and learn more about its new SmartShop app.

David met with the team at the store, and praised them for the service they give to local shoppers and the community more widely, through the Sainsbury's 'Local Heroes' scheme. This sees Sainsbury's stores across the country, including in Macclesfield, donating money to local charities and good causes. In Macclesfield, the company works closely with Park Lane School, working alongside contractors to help make improvements to the school’s grounds and garden. David was pleased to hear that Sainsbury’s is committed to continuing this positive partnership into the future.

On his visit, David also joined store Deputy Store Manager, Neil Davison, and the SmartShop team, to see this new shopping and payment system in action for himself. Mr Davison explained that customers can now download the app on their smartphones, then scan their shopping as they go and pay for it through the app, from anywhere in the store, using Apple Pay. This saves time queuing at designated till points, making shopping faster and more convenient. The service is already proving popular in Macclesfield, which is one of over 100 stores where the app is in operation.

Speaking after his visit, David said, "It was great to visit Sainsbury’s in its 150th anniversary year and to hear more about the work the store is doing support the local community through its partnership with Park Lane School. I also enjoyed seeing the new SmartShop app in action, and it is good to hear more about its popularity locally. I am grateful to all at Sainsbury’s Macclesfield for their work and my visit has given me clear insight into this.”