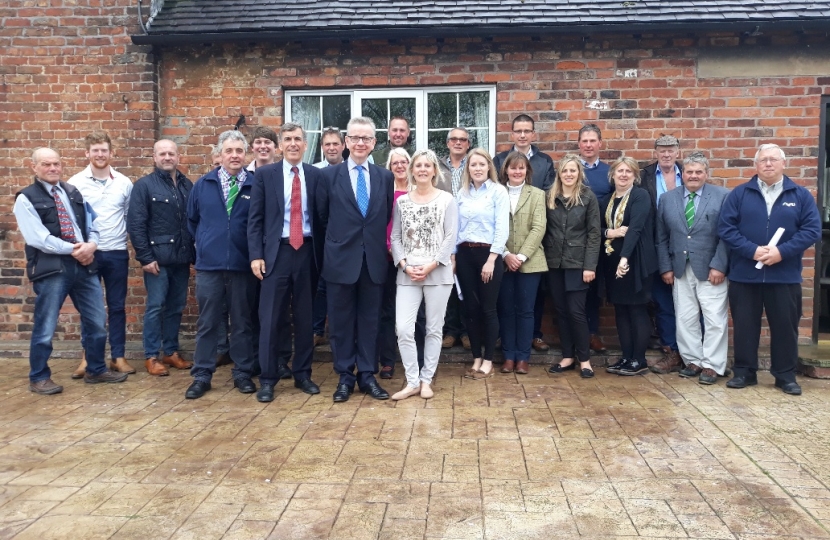 The Secretary of State, who attended at David’s invitation, answered questions about the future of farming, the Government's Clean Air Strategy, Environment Management, and issues relating to the UK's withdrawal from the EU. Mr Gove addressed the meeting and spoke about the Government's continued support for the agricultural sector, and the vital role that farmers play in providing food, promoting high standards of food and animal welfare, and acting as stewards for our much-valued countryside.

Over twenty farmers were present at the meeting, which was organised by the Macclesfield  branch of the National Farmers Union, from across local agricultural sectors, including dairy, livestock, poultry, and sheep, meaning that a wide range of important topics could be covered. In addition, several younger farmers also attended, helping to give a fresh perspective on these important issues. The meeting was kindly hosted by dairy farmers Robert and Julie Venables, of Northwood Farm in Siddington, nearby to Macclesfield.

Speaking after the meeting, David, who is also a Minister at the Department for the Environment, Food and Rural Affairs, said, "I am pleased that the Secretary of State was able to join this meeting, to hear the views of local farmers on issues of importance to their sectors. It was great to see such a broad cross-section of the farming community around Macclesfield present, helping to make this a productive and constructive discussion. I am grateful to the National Farmers Union for their support in facilitating the meeting, and look forward to continuing to work with local farmers in the months ahead."