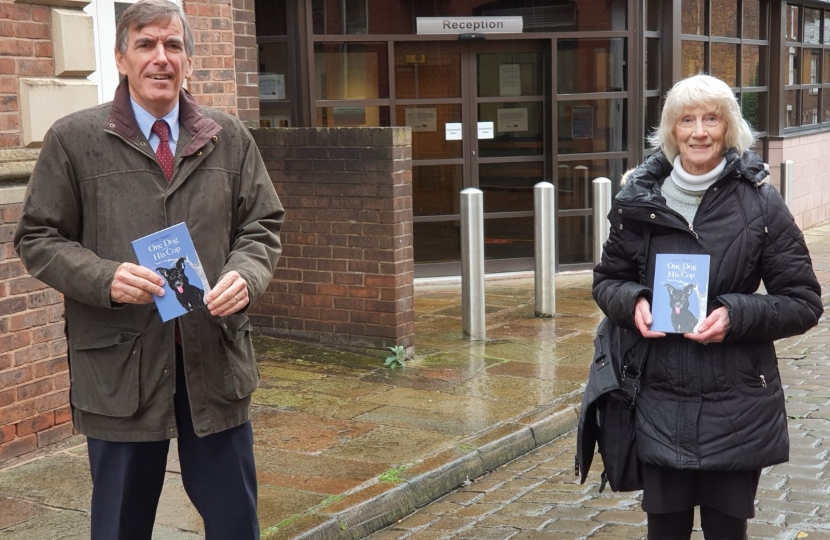 David Rutley, MP for Macclesfield, has recently met with local Bollington author Jenny Martin to discuss and support her latest book, ‘One Dog and His Cop’. The book sets out a heart-warming true story of how a cuddly German Shepherd puppy, called Villain, grew into an award-winning Devon and Cornwall Police Dog.

Jenny’s book details how Villain and his handler, Graham, formed a partnership filled with respect, bravery and kindness. As a former Minister for Animal Welfare, David has a longstanding interest in the welfare of animals. He welcomes Jenny’s decision for the proceeds of the book to go to the animal welfare charity, the Dogs Trust. Further details on the book can be found here:  https://www.silverwoodbooks.co.uk/product/9781800420120/one-dog-and-his-cop.

One Dog and His Cop also includes a mention of Bonnie, the famous Macclesfield Police Dog, who was injured in the line-of-duty when tackling a violent offender in June 2017. The brave police dog, then a six-year-old German shepherd, was viciously kicked in the face while on patrol with her handler. Following the incident, Bonnie made a full recovery.

During his time as Minister for Animal Welfare, David supported the Animal Welfare (Service Animals) Act - or ‘Finn’s law’ - to protect service animals, such as police dogs and horses. The Act prevents those who attack or injure service animals from claiming self-defence. David also supports further legislation to increase sentences for animal cruelty.

This is not the first literary endeavour from Jenny Martin that David has been pleased to support. In 2018, he met with Jenny to discuss her book ‘In Our Fathers’ Footsteps’ which chronicled the experiences of her and her husband’s families during the Second World War.

Following their meeting, David said, “We say a dog is man’s best friend, Jenny’s book makes that very clear indeed – especially for the police officers who keep us safe on frontline duty. Service animals play an important role and I am pleased that they are better protected in law. I wish Jenny’s book every success and hope more local residents take the chance to read her latest story.”