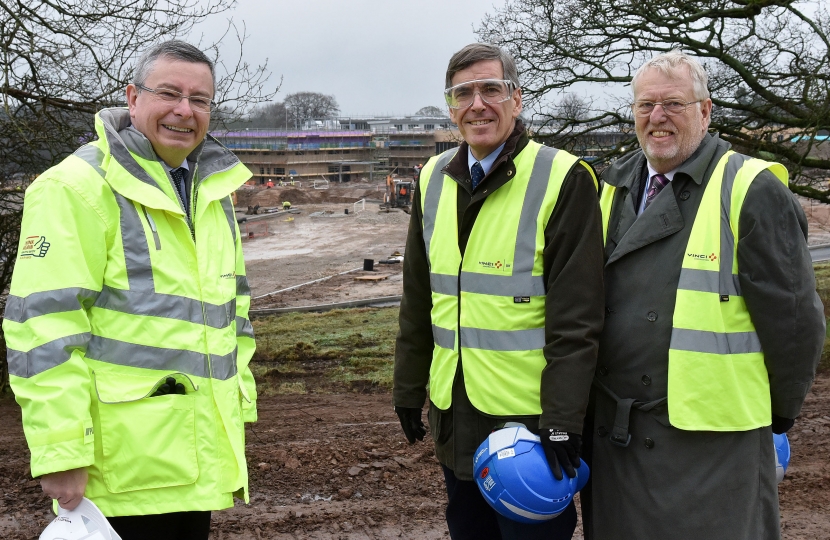 The King’s School in Macclesfield's relocation from its current two sites at Fence Avenue and Cumberland Street to a new, purpose-built campus close to Derby Fields, near Macclesfield, continues at pace, as local MP, David Rutley, saw for himself when he visited the new site.

Joined by the school's Headmaster, Dr Simon Hyde, David donned wellies and a hard hat as he toured the ongoing development, which is scheduled to open on time in the summer of 2020. Dr Hyde explained that the £60 million campus will provide a main academic building, housing all year groups, both boys and girls, within the school, from infants all the way through to sixth form, as well as a separate Sports Centre and 80-acres of sporting and outdoor facilities.

Dr Hyde explained that it was important for King’s long-term sustainability for all parts of the school to be brought together at a single location. David is pleased that the school has been able to fulfil this important aspiration at the new and impressive site near to Macclesfield, meaning that its 500-year presence in the town can be maintained.

As well as congratulating the school on the progress being made with the new campus, David also took the opportunity on his visit to discuss with Dr Hyde potential concerns about increased traffic on nearby roads that might follow as a result of the development. Dr Hyde explained that the school will maintain its existing network of coach routes, with additional plans to put on two shuttle minibus links with Macclesfield and Prestbury train stations, which will help to ease congestion on local roads.

With the completion of the new campus, Dr Hyde will be stepping down from his role as King’s headmaster at the end of this school year, to take up a new position as Secretary of the Headmasters’ and Headmistresses’ Conference (HMC). David took the opportunity to thank Dr Hyde for all that he has achieved for the school’s pupils, and wished him well for the future.

Speaking after his visit, David said, "Students and staff at the King’s School can be very proud of the progress that is being made to deliver the new campus by the summer, in time for next school year. It was positive to see the impressive site and the ongoing work for myself. I wish all at the school every success with the move to the new campus. I also extend my very best wishes to Dr Hyde as he moves on to the exciting new opportunities in his next position."