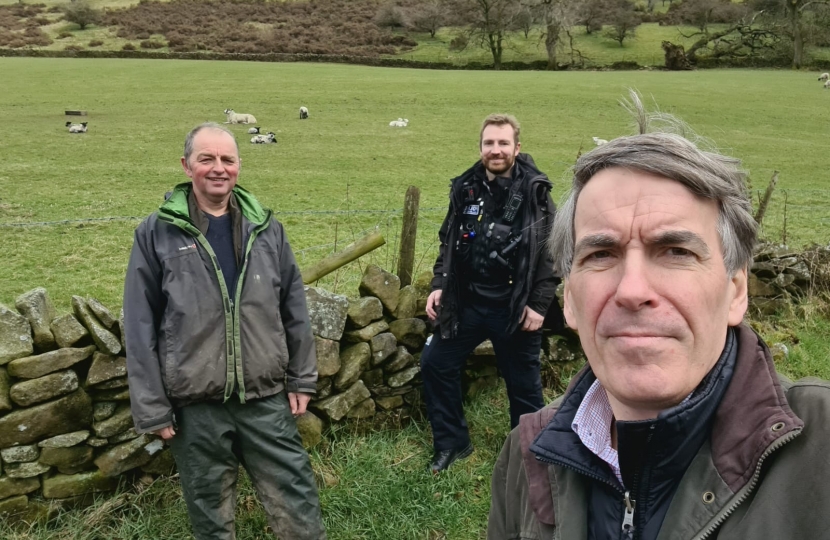 Ahead of the Easter weekend and as we start to move along the roadmap out of lockdown, local MP, David Rutley, is urging dog owners in Macclesfield, and visitors, to make sure they know their responsibilities and keep their dogs on a lead when close to livestock to avoid sheep worrying.

Having actively worked with the NFU and local farmers on this important issue over many years, David is actively backing their latest campaign for dogs to be kept on a lead and under control. On a recent visit to Clough House Farm, Macclesfield Forest, David met with local farmer, John Cantrell, and Sgt Rob Simpson, Cheshire Police Rural Crime Team to support their call for extra vigilance during the vital lambing season.

During the visit, David was told by Sgt Simpson that 50 sheep have already been killed this year in Cheshire from attacks by dogs and two dogs have been put down, as a result. Mr Cantrell explained how sheep worrying not only causes physical harm and stress to his livestock, but also has huge financial consequences through the loss of sheep, increased vet bills for injured sheep and damage to fences and field boundaries. In total, the NFU has estimated that dog attacks on livestock are costing farmers £1.6m a year.

As Sgt Simpson set out in a recent BBC Crimewatch episode, farmers are increasingly concerned about sheep worrying as we enter the Spring season. During the programme, Sgt Rob Simpson highlighted the vital need for dog owners to act responsibly and keep their dogs on a lead when walking through fields with livestock. This guidance is clearly set out in The Countryside Code.

Under the Dogs (Protection of Livestock) Act 1953, if a dog worries sheep on any agricultural land, the person in charge of the dog can be fined up to £1,000 if found guilty.

Speaking after his visit, David said, “Around Macclesfield, dog owners are fortunate to have access to great countryside walks with their dogs. It is vital that dogs are kept on a lead around livestock and owners follow recommended guidance to ensure farm animals are kept safe, particularly during lambing season. I am very grateful to Sgt Simpson and the Cheshire Police Rural Crime Team for all that they do to help tackle this issue and to protect farmers and our rural communities.”

Delighted the Prime Minister visited AstraZeneca's Macclesfield campus to highlight the company's £380 million investment in the site. It's a real boost to manufacturing and the highly skilled team on the site, and a real vote of confidence in the local economy.